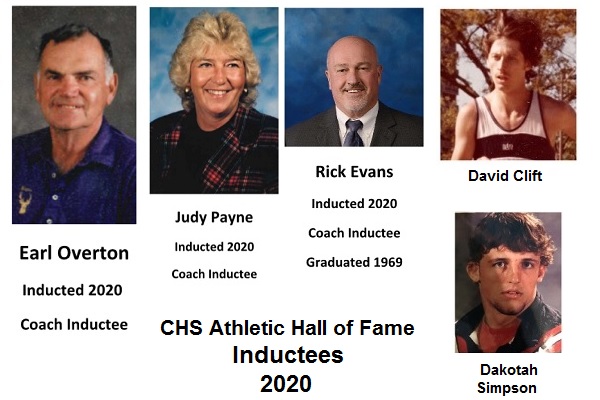 Earl Overton
Inducted 2020
Coach Inductee
Earl Overton coached football at Cushing High School from 1960 to 1962. Coach Overton was an assistant for Hall of Fame Coach Melvin Skelton during the 1960 season prior to becoming the Tigers’ Head Coach in 1961. As Head Coach, Overton led CHS to an 11-2 record that culminated with a Class A Oklahoma State Championship. The Tigers defeated Oklahoma City Harding 15-14 on December 8th at Jim Thorpe Stadium in Shawnee. Coach Overton’s 1961 Tigers would garner national attention, with some rankings listing Cushing as high as the seventh best team in the country. Coach Overton was named the 1961 Oklahoma Coach of the Year.

Judy Payne
Inducted 2020
Coach Inductee
Judy Payne coached at Cushing High School from 1976 to 1986 before becoming the CHS Counselor. A product of Wapanucka High School, Judy went on to play college and semi-professional basketball. Upon graduating from Southern State University, Judy Payne began her career coaching girls’ basketball and cheerleading at Chandler High School. Coach Payne always pushed her team to be their absolute best and took her team to the Area Tournament her first year coaching. When Judy arrived in Cushing in 1976, the only women’s sports available were track and a basketball program which had only been in existence for two years. Judy’s passion for growing CHS women’s athletics would lead her to assume a number of coaching roles including basketball, tennis, track, cheerleading, and even volleyball. She took on many of these roles in the hopes of creating and expanding the number of girls’ sports available at CHS, which she successfully achieved. Judy’s players always knew she wanted the best for them from stomping her foot during basketball games, driving them across the state to camps, and even refinishing the gym floor herself when needed. Coach Payne’s ability to push students and athletes to be their best, as well as laying the groundwork for women’s athletics to grow and prosper at CHS will be her legacy.

Rick Evans
Inducted 2020
Coach Inductee
Graduated 1969
A 1969 graduate, Rick Evans was a 3-sport athlete for CHS, participating in football, basketball, and baseball. In 1986, Evans, an All-Conference pitcher, would lead the Tigers to a State Finals appearance. During his senior campaign, Rick once again led the Tigers to a State Tournament appearance, while garnering All-Conference and All-State accolades. After graduation, Rick went on to play baseball at Eastern Junior College and Southeastern State University, where he was named All-Conference pitcher at the collegiate level. Following his baseball career, Rick’s love for the game would continue through coaching. During his 25-year football and baseball coaching career Rick made stops at Yale, Perkins, Perry, and Antlers before returning home to Cushing in 1986. Rick served as the Head Baseball Coach of the Tigers for 12 years. Throughout his coaching career, Rick was named the Oklahoma Coaches Association Region 2 Coach of the Year three times and amassed 456 wins.

David Clift
Inducted 2020
Athlete Inductee
Graduated 1979
A graduate in 1979, David Clift was a standout on the Cushing Tiger Track Team. As a junior, Clift accumulated 95 points over the course of the season and finished the year with a State Championship in the Mile Run with a time of 4:46.10. During his senior campaign, David compiled 10 first place finishes while accumulating 108 total points. Once again, he would finish the year as an Oklahoma State Champion in the Mile Run, finishing in a blazing time of 4:33.82. During his junior and senior campaigns, Clift totaled 19 first place medals and was undefeated in Class 2A competition.

Dakotah Simpson
Inducted 2020
Athlete Inductee
Graduated 2006
A 2006 graduate, Dakotah Simpson led Cushing High School to three Dual State Wrestling Championships and two Traditional State Championships. Individually, Dakotah was a four-time State Placer and a three-time State Champion, wrestling all four years at different weights. Dakotah ended his high school career with an impressive 153-13 record. Dakotah also set the Cushing Wrestling Career Pins record during his time with 95 falls. This record stands today. Following his senior season, Dakotah was named to the 2006 USA Wrestling All-American team. After graduating from Cushing, Dakotah attended Oklahoma State University on a wrestling scholarship. During his Freshman season, Dakota was pulled out of Redshirt status during a National Duals match against Iowa. Dakotah picked up the fall in 1:17, helping to lead the Cowboys to a huge victory over the rival Hawkeyes.