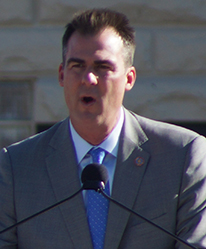 Robo-texts to raise money for political campaigns are as common as mosquitos at the lake in the summertime. Throughout the summer, Kevin Stitt’s re-election campaign has been sending fundraising texts that use the common right-wing election rhetorical stances of division and fear to raise money.

On June 21, the campaign sounded the alarm about impending threats to Stitt: “Gov. Stitt is under attack for delivering on the People’s Agenda. Help him keep radical [d]emocrats agenda out of OK: DONATE.”

First of all, who is writing these texts that would not pass 8th grade English class? The best guffaw comes from the writer’s seemingly unaware of the Communist association with the phrase, “People’s Agenda.” Also, who are these scary Democrats?

Run Away! The Democrats Are Coming!

June 25, the campaign warned its donors followed by the financial call to action: “Gov. Stitt is being targeted by Democrats everywhere for delivering on the People’s Agenda. Can you chip in to help fight back?” The governor’s campaign continues hyperbolizing threats from Democrats in an all-red state.

The Stitt campaign must think we don’t know that Oklahoma features a Republican majority in the state house and senate, along with a GOP governor and lt. governor. The state has not voted for a Democratic presidential candidate since LBJ. President Obama lost all 77 counties both times he was elected. President Trump carried Oklahoma easily in both elections, and, ironically, Oklahoma’s junior governor (Lankford-R) was at the podium making a joke about not disrespecting voters in Arizona when he was alerted the capitol had been breached by terrorists on January 6. What exactly are voters supposed to be afraid of from Democrats in Oklahoma? Why should Oklahomans be more wary of liberals than at least five Oklahomans from our state that were invading the capitol during the insurrection on January 6?

While voting numbers are not in favor of Democrats in Oklahoma, those aggregate numbers will change over the next generation due to more than 50% of K-12 students now in Oklahoma are non-white. That portends a non-white voting majority in the future, which is the real fear of the Stitt campaign. As for the economy, according to US News & World Report, Oklahoma is 36th “Best State for Growth” in the US, with a 27 ranking in opportunities for growth per the state’s track record economically for the last three years. The state is not at the bottom of the barrel in nationwide comparisons, but nor are we in the top half.

For whatever reason, the governor’s campaigners are seeming more urgent. the campaign continued its rhetoric of threats by a non-existent force. June 26, the campaign urged it supporters: “If you rush $10 now, Gov. Stitt will have the resources he needs to hold off the radical left.” These are very common GOP fundraising fear-tactics, which are then translated into donating money to confront the opposition. No surprise, crime is brought up next under the pretext of supporting “the blue,” or law enforcement.

July 3, the campaign throws down the scare tactics followed by a petition: “Crime rates are spiking, yet Democrats still want to defund the police. Will you sign our petition to back the blue with Gov. Stitt.” However, no petition exists. Clicking on the link sends the curious to a donation page.

Did you hear me? Gimme Your Money!

Through early July, backing the blue has been the primary theme of the political consultant-driven cycle of fund-raising texts. On July 6, campaign texts made a harassing request of his donors for the 2022 campaign on Tuesday. The Republican governor says, “Kevin Stitt here. Have you not seen our texts? I want to know if you will joining me in backing the blue? Let me know TODAY!” Stitt’s campaign has resorted to bullying its donors for money with fear and guilt instead of reaching out with accomplishments and concrete facts.

The 2022 re-election campaign for Kevin Stitt is in full-swing. Supporters and the governor himself seem certain of a re-election victory. Oklahomans seem resigned to it, knowing it will take a generation to recover from this era politically, socially, and psychologically. Tribes could care less as they will outlast any governor, especially one they have defeated repeatedly in the courts. Republicans will keep their majority. The “radical left” will keep going to Woodyfest.