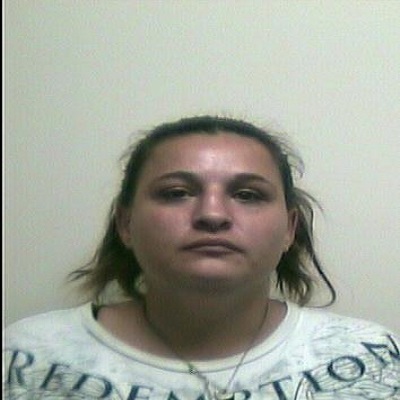 (Stillwater, Okla.) — A Yale woman on probation for assaulting a sheriff’s deputy pleaded guilty Tuesday to attacking a Yale emergency medical technician, resisting arrest and being intoxicated in public.

Natasha Owens, 34, who has also been known as Natasha Danielle Jane Coffman, was given a 10-year prison term Tuesday by Associate District Judge Stephen Kistler, who advised her in court that he would suspend the balance of her sentence on her completion of an RT (regimented training) program in custody.

Owens was ordered to have a mental health evaluation, follow any recommended treatment, undergo random drug tests, and pay $1,260 in assessments for the felony attack on an EMT. Owens was given concurrent jail terms of 30 days for public intoxication and one year for resisting arrest.

Owens, then known as Coffman, was arrested by Yale Police Chief Phillip Kelly shortly before 3 pm on Aug. 26, 2020, according to his affidavit.

When the Yale police chief, who was on patrol, was dispatched to the station, he saw a medic taking the defendant’s blood pressure and asking her if she had taken any drugs, the affidavit said.

The intoxicated defendant “was very nice at times and then very belligerent,” the affidavit said. “Cushing ambulance arrived to check (her) out. (She) would not tell Cushing anything and just wanted to leave. Cushing did not treat (her), and I placed her under arrest,” at 2:56 pm, the Yale police chief wrote in his affidavit.

“I was walking her back to my unit and I needed to move a couple of items from my back seat to the front seat. (She) was getting belligerent again and unruly. I asked for a backup officer. Officer Jerry Haley arrived and we attempted to get (her) in the back of my unit; she refused and started fighting and kicking.

“I finally grabbed her legs and Haley had her torso and we got her in the unit. (She) kept kicking and trying to bite,” the Yale police chief wrote in his affidavit.

A Yale medic was trying to help when Owens “began to slam her head into the plexiglass. I had Haley stay with her while I went to get my leg irons in the PD. At some point, (the defendant) tried to bite the medic’s breast and was pulled away prior to breaking the skin; there was saliva left on (the female medic’s) shirt where the breast is located,” the Yale police chief wrote in his affidavit.

“We all then began the process of getting the leg irons on (the defendant) and she kept fighting and we were finally successful in securing her legs where she could not kick anymore, and getting the seat belt secured where she could not reach the plexiglass cage to hit her head anymore,” the Yale police chief wrote in his affidavit.

At 3:17 pm, “I transported (her) to Stillwater Medical Center to get authorization that she could be taken to jail. While handcuffed to the hospital bed, I saw a square object in her shirt, below her breast area. I asked (her) what it was and she replied a marijuana one-hitter container. I had her remove it from under her shirt and asked if she had any other contraband and she sated negative. (She) was treated and released by SMC and transported to Payne County Jail,” at 4:25 pm, the Yale police chief wrote in his affidavit.

“Upon arrival at the jail, a female nurse was asking (her) questions and (she) became belligerent and said, ‘F… you.’ Finally, (she) was taken into the jail area for booking and was placed in a holding cell. (She) began screaming and kicking the door with her feet and head numerous times,” the Yale police chief wrote in his affidavit.

According to court records, Owens had pleaded guilty in 2017 to hitting Payne County Sheriff’s Deputy Scott Hopper while she was intoxicated in Ripley. She was given a six-month jail term followed by four and one-half years of probation with an order to have mental health and substance abuse evaluations, perform any recommended follow-up, and undergo random drug tests.

In court Tuesday, the judge ruled that she had violated her probation and revoked the balance of her sentence to incarceration, but said that would be suspended on her completion of the RT program in custody.

Five years earlier, Owens had pleaded guilty to possessing methamphetamine, marijuana and drug paraphernalia in Stillwater in 2011, for which she was given a 60-day jail term followed by two years and 10 months of probation under a deferred sentence. But two years and eight months later, Owens was found in violation of her probation, given a five-year suspended sentence and admitted into a residential substance abuse treatment facility that takes a minimum of six months — which she left three months later without permission, court records show.

After Owens was arrested five days later in Idabel, she was admitted into another substance abuse facility from which she said she graduated nine months later, court records show. However, the following year after Owens was sentenced for assault and battery on a sheriff’s deputy, she was found in violation of her probation and given a concurrent six-month jail term in 2017, court records show.