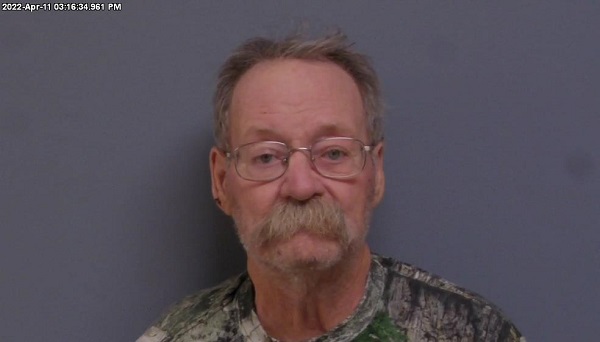 John McHarold Higgins
Posted on May 17, 2022
By Patti Weaver
(Stillwater, Okla.) — A 67-year-old man, who allegedly pointed a gun at his girlfriend’s head and threatened to kill her and then himself, remains jailed on $200,000 total bail pending a June 29 preliminary hearing on a two-count felony firearm charge.
John McHarold Higgins, who said he would get in a shoot-out if law enforcement came to his Yale home, was shot when officers saw him with a gun, Oklahoma State Bureau of Investigation Agent Lynda Stevens alleged in an affidavit.
After Yale police received a 911 open line call at 10:09 am on April 6, a dispatcher called back and talked to a woman, who said Higgins “had just pointed a gun at her head and said he was going to kill her and then himself. She went on to say Higgins had a hold of her by her hair, but she was able to free herself from his hold and ran away from him,” the affidavit alleged.
When Yale Police Officer Ken Moore contacted Higgins’ girlfriend across the street from the house, she said Higgins had a gun and was suicidal inside the residence with his elderly mother, the affidavit alleged.
The officer called Higgins and asked him to come outside to talk with him, but Higgins refused to do so, the affidavit alleged.
“Higgins indicated to the officer he wasn’t going to leave his residence alive and if law enforcement came to his residence, he would get into a shoot-out with them,” the affidavit alleged. Higgins said that he was not going back to prison, the affidavit alleged.
At 10:25 am, the Yale officer called the Payne County Sheriff’s Office to ask for assistance “with a barricaded subject with a possible hostage,” the affidavit said.
When the Payne County Multi-Jurisdictional Special Operations Team responded, “Higgins confirmed his elderly mother was inside the house and that he did not want his mother harmed,” the affidavit alleged. At 12:02 pm, Higgins’ mother left the house, unharmed and safe, the affidavit alleged.
“Law enforcement ran a criminal history check on Higgins and learned he had a multi-state criminal history,” including a felony conviction for aggravated assault in Harris County, Texas, in 1992, court records show.
“Negotiations continued with Higgins, but were futile,” the affidavit said. At 2:32 pm officers obtained a search warrant for the residence and Higgins’ arrest for feloniously pointing a firearm at his girlfriend and being a felon in possession of a firearm, the affidavit said.
At 2:49 pm, when Higgins came to a door, “officers observed Higgins with a gun, and a member of the Special Operations Team shot Higgins,” who was arrested and given medical care before being transported to a Tulsa hospital for further treatment, the affidavit alleged.
Higgins had a .22 caliber pistol gun in his jeans pocket and a second handgun in the entryway of his house, just a few feet from the door, the affidavit alleged.
When Higgins’ girlfriend was interviewed that day, she said “she pulled up at her residence, got out of her vehicle, and was approached by Higgins. Higgins ‘came at her’ and pulled a gun out of a ‘sling’ bag. Higgins pointed the gun at her and grabbed her by her hair and began pulling her by her hair in an attempt to get her inside their residence,” while she dialed 911 on her cell phone, the affidavit alleged. She “struggled against Higgins and was able to free herself from his hold and leave the property,” the affidavit alleged.
In addition to his felony counts, Higgins was also charged with misdemeanor domestic abuse by dragging his girlfriend by her hair, court records show.
In a separate misdemeanor case, Higgins was charged on that same day with threatening to kill a man, who lived in the couple’s home where Higgins’ girlfriend was his caregiver, court records show.
The man, who is a patient at a dialysis clinic in Stillwater, was afraid that Higgins would get out of jail and “come shoot up the place,” an affidavit by Stillwater Police Officer Joey Johnsonbaugh alleged. He said that Higgins “is very revengeful and knows that he does dialysis here in Stillwater and is afraid he may show up,” the affidavit alleged. He said that he was going to change locations for his dialysis treatment, the affidavit said.
The man said that on April 6 at 10 am when a SWAT team was sent to the Yale residence, “he was in the dialysis clinic and was getting off treatment early,” so he called Higgins’ girlfriend, who is his caregiver, the affidavit said. She told him to contact Higgins for a ride home, the affidavit alleged.
When he contacted Higgins, Higgins said “the police are at the house and that bitch (his girlfriend) made me mad, and I’m going to kill someone,” the affidavit alleged.
Higgins told him, “I am going to kill (her) and you and everyone in this house,” the affidavit alleged.
If convicted of his felony gun charges, Higgins could be given as much as a 20-year prison term. If convicted of his misdemeanor counts of dragging his girlfriend by her hair and threatening to kill the dialysis patient, who lived with the couple, Higgins could be given 18 months in jail.