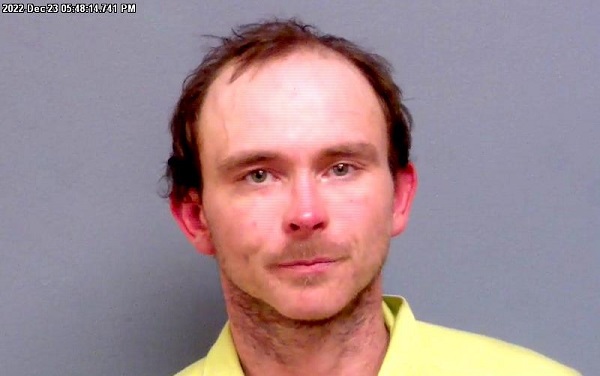 (Stillwater, Okla.) — A Yale man with a history of domestic violence arrests has been jailed on $25,000 bail pending a Jan. 31 preliminary hearing on a felony charge of domestic assault and battery in the presence of minors as a subsequent offense.
Cameron Ray Chatham, 31, who was arrested by Yale Police Officer Alesha Hammons at 4:50 on Dec. 23 at his girlfriend’s apartment, could be given as much as a 10-year prison term if convicted of holding her down with a raised fist and causing injury to her face and body, court records show.
“Officer Lombard had been at this residence the previous two days for disturbances, and I have taken pictures of (his girlfriend) after altercations before,” the officer wrote in an affidavit.
His girlfriend, who obtained an emergency protective order against Chatham on Jan. 4, “had red marks on her neck, her chest, her back, her legs, and the sides of her face,” when police were dispatched to her apartment shortly after 4 pm on Dec. 23, the affidavit said.
A Cushing ambulance service crew assessed Chatham and his girlfriend, the affidavit said. His girlfriend refused treatment but said she might seek it later with a relative, the affidavit alleged.
Chatham’s girlfriend showed the officer text messages from Chatham, who “stated that he was going to ‘show up there and kick the f…… door in,” the affidavit alleged.
“While speaking with Officer Keith Hammons, Chatham stated that he was just defending himself and holding her down. I took pictures of his neck showing some scratches on either side.
“Officer Keith Hammons also retrieved (Chatham’s girlfriend’s) cell phone from Chatham’s pocket. He claimed that she had dropped it and he just picked it up to protect it from damage,” Officer Alesha Hammons alleged in the affidavit.
Two small children were present at the time of the incident, the affidavit alleged.
According to Creek County court records, Chatham had been convicted in 2015 of domestic assault and battery by strangulation in Drumright for which he was originally placed on three years’ probation with conditions including taking a 52-week domestic violence prevention class, but nine months later he was found in violation of his probation and sent to prison where he served one year of a three-year sentence.