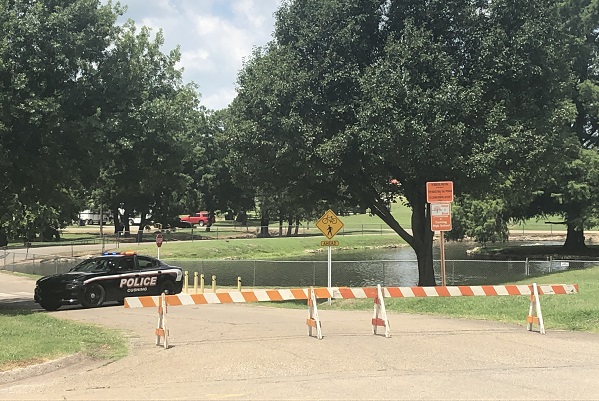 Cushing Memorial Park was closed Sunday after a woman's body was found in the duck pond. (KUSH photo)
Posted on July 6, 2020

(Cushing, Okla) — On July 5, 2020, at 9:14 a.m., Cushing Police received a 911 call telling the dispatcher that a person had been found in the duck pond at memorial Park.  When officers arrived, they found a white female, later identified as Cushing resident Tonya Carter, 44 years old, deceased in the water near the shoreline.

Cushing police requested the investigative assistance of the Oklahoma Stat Bureau of Investigation, which included investigators and a crime scene technician.  Following the investigation at the scene, Carter’s body was taken to the State Medical Examiner’s Office in Oklahoma City.  A formal cause of death will be determined by the medical examiner.

Carter’s next of kin have been notified.  The investigation is still ongoing and no other information will be released until the medical examiner has issued a formal cause of death.