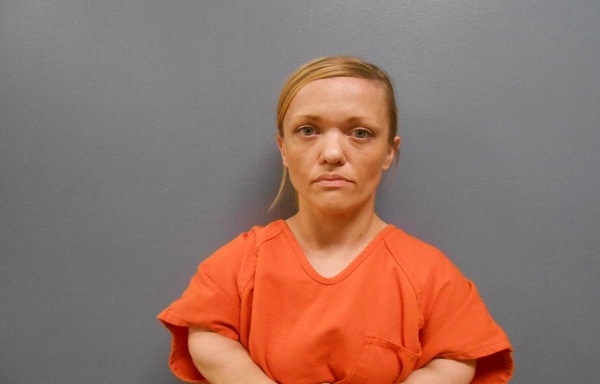 Jennifer Lynn Price
Posted on September 24, 2021
By Patti Weaver
(Stillwater, Okla.) — A Tulsa woman, who was arrested in the Cimarron Casino’s north parking lot, has been jailed on $50,000 bail pending a Sept. 28 court appearance with an attorney on charges of trafficking methamphetamine, driving on a revoked license, and possessing drug paraphernalia in Perkins.
Due to her criminal record, Jennifer Lynn Price, 36, could be given a prison term of 30 years to life if convicted of possessing more than 20 grams of methamphetamine in Perkins. She could also be given two one-year jail terms if convicted of her other two counts that are misdemeanors.
Price was driving an SUV with a paper tag dated 8-37-2021 when she was arrested on a traffic stop at 4:27 pm on Sept 12 by Perkins Police Officer Daryn Zanfardino, according to his affidavit filed last week.
“Price stated that she did not have her license on her and stated that she had not received the bill of sale for the vehicle yet. I asked Price how she planned on getting into the casino without an ID and she stated that she had her ID on her and just not her license.
“Price stated that if I ran her name that she was pretty sure that she would have a warrant out of Rogers County,” the Perkins officer alleged in his affidavit.
Price’s driving privileges had been revoked and Kingfisher had a warrant for her, according to a Payne County dispatcher, who had not yet reached Rogers County officials, the affidavit alleged.
After Price was arrested, the Perkins officer found a smoking device with residue consistent with marijuana in a purse in the back hatch of the SUV, the affidavit alleged.
“I explained to Price that I located some marijuana paraphernalia and asked her if she had a medical marijuana card; she stated that she did not and that her friend did,” the officer alleged.
“While enroute to the jail, Price asked if it would be too late for her to be honest with me. I told Price that if she had drugs on her to tell me now and that I wouldn’t charge her with the felony of taking it into the jail. Price stated that she had a pipe in her pants that she used for methamphetamine. I asked Price if there was anything else and she stated that there was not,” the officer alleged.
But at the Payne County Jail, Detention Lt. Gina Hutchison said they found two bags in Price’s pants, one of which had a substantial amount of a white crystal-like substance that later tested positive for methamphetamine, the affidavit alleged.
“In Price’s purse, we located $910,” and some clear plastic baggies that can be used to distribute drugs, the Perkins officer alleged in his affidavit.
According to court records, Price had been placed on four years’ probation in 2019 in Rogers County for bringing drugs into the jail; she also received two concurrent two-year suspended sentences in 2012 for endeavoring to possess methamphetamine and unlawful use of a communication device to facilitate a felony, along with a concurrent one-year suspended sentence for a bogus check, all in Pontotoc County.
***