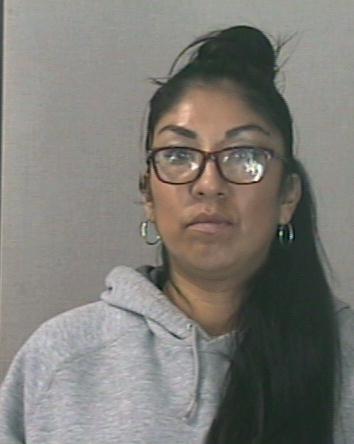 Rachel R Arkeketa
Posted on September 30, 2021
By Patti Weaver
(Stillwater, Okla.) — A Tulsa woman with an extensive criminal record, who was wanted by multiple jurisdictions, has been given a five-year prison term for possessing a stolen truck in Glencoe that had been taken in Pawnee County.
Former Pawnee resident Rachel Raquel Arkeketa, 37, admitted her guilt last week to Payne County District Judge Phillip Corley, who sentenced her in accordance with a plea bargain with the prosecution.
Due to her prior convictions in Payne, Pawnee and Kay counties, Arkeketa could have received a sentence of four years to life in prison.
Arkeketa was arrested on June 24 by Payne County Sheriff’s Deputy Jacob Secrest, who was advised that a truck stolen in Pawnee County was “now entering Payne County on State Highway 108 north of Glencoe,” and being driven by Arkeketa, according to his affidavit.
The truck owner “had left their cell phone in the vehicle and was actively tracking their phone and providing location updates,” the affidavit said.
When the truck was stopped, “I observed Rachel to be wearing a hospital admissions bracelet and she had sticky pads on her still that are typically used to monitor vitals in a hospital. I attempted to remove the plastic hospital bracelet so I could identify Rachel because she would not tell me where her ID was. The hospital bracelet identified her as Rachel Arkeketa,” the deputy wrote in his affidavit.
A dispatcher said that Arkeketa “had warrants through the Payne County Sheriff’s Office, Noble County Sheriff’s Office, Pawnee County Sheriff’s Office, Ponca City Police Department and the Sumner County Sheriff’s Office out of Kansas,” the affidavit said.
“Pawnee City Police Department advised Rachel had been at the hospital due to methamphetamine use in the morning and was transferred to the hospital in Cushing where a tribal officer picked Rachel up and gave her a ride to a shelter in Pawnee. Rachel had fled the shelter just prior to the theft of the truck.
“I was concerned for her welfare due to being in the hospital recently and asked her if she was okay. Rachel said she was on her way back to the hospital due to anxiety. Rachel was much calmer than when I initially pulled her from the truck.
“I asked Rachel why she stole the truck. Rachel said because she had anxiety really bad and wanted to go to the emergency room. I asked Rachel if she knew the people who owned the truck and Rachel shook her head in the negative.
“I asked Rachel if it was just an opportunity and she shook her head in the affirmative and said ‘yeah, I wasn’t really sure whose’ and trailed off. I asked Rachel if there was anything in the truck that was hers and she said no,” the deputy wrote in his affidavit.
According to court records and the state Department of Corrections, Arkeketa was convicted of methamphetamine possession in Pawnee in 2017 and given a five-year prison term, but she was released 18 months later to an Oklahoma City church-sponsored program that she left four months later. She was also serving a concurrent five-year prison term in 2017 for possessing stolen property in Payne County.
At the time of her last arrest, Arkeketa was on five years’ probation for attempted first-degree robbery in 2020 in Pawnee County. She also had been given four and one-half years probation in 2016 for unauthorized use of a vehicle in Kay County where she had been placed on seven years’ probation for false impersonation in 2014.