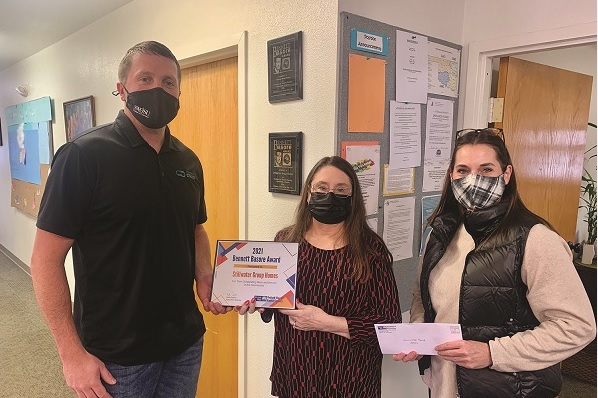 (Stillwater, OK – Jan. 28, 2022) – United Way of Payne County held their annual meeting via Zoom on Thursday to celebrate reaching their $950,000 campaign goal in 2021, present awards and commemorate their 70th year of fundraising.

“2021 was quite the year for United Way and our 22 nonprofit partner agencies,” Ruth Cavins, United Way executive director, said. “They persevered through impossible times and continue to serve.  They are the ‘why’ of what we do, and it was an honor to celebrate them at our annual meeting.”

Stillwater Group Homes was presented with the 20th anniversary Bennett Basore award. The award was established in honor of late United Way board member Bennett Basore to recognize accountability and outstanding work among the partner agencies. This is the third time Group Homes has received the award, which comes with a $1,000 grant.

“Our top fifteen workplace campaigns include pledges and donations from more than 1,500 employees,” Cavins said. “These businesses raised 78% of our campaign goal. It truly shows how much they care for our community.”

The Board Member of the Year Award was presented to Chris Ormsbee with the OSU Institute for Teaching and Learning Excellence (ITLE) for her commitment and hard work during the campaign. Ormsbee, who was also campaign chair, was nominated by her fellow board members.

“Chris continues to go above and beyond in her service to United Way,” John Mark Day, 2021 United Way board president, said. “She not only chaired a highly successful campaign, but has been a long-time cheerleader and supporter of the organization.”

The meeting’s theme was “70 Years of Giving,” to commemorate the United Way’s beginnings in 1952. That year, a group of citizens came together to recognize the need for collecting fundraising to benefit service organizations.

In 1957, new bylaws were adopted and the organization’s name was changed to the United Fund of Stillwater. They went through several name changes over the years to better represent their service area: Stillwater United Way (1976), Stillwater Area United Way (1987) and finally to United Way of Payne County (2017).

Today, the United Way of Payne County invests donated dollars in its 22 partner agencies to improve the health, education and financial stability of every citizen in Payne County.

“We are looking forward to our 70-year campaign,” Lee said. “The annual campaign kicks off in September each year. We hope to make an even bigger and better impact in 2022.”

A small group of board officers and United Way staff gathered in-person at OSU ITLE, who hosted the Zoom meeting. Representatives from the partner agencies and workplace campaigns were in virtual attendance.

If you would like to learn more about United Way, visit unitedwaypaynecounty.org, call 405-377- 2161 or stop by the United Way office at 109 E. Ninth Ave. in Stillwater.