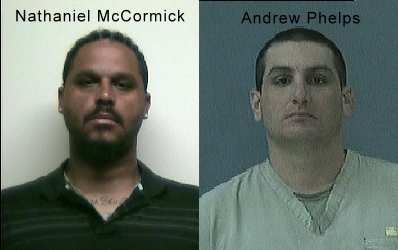 (Stillwater, Okla.) — Two ex-convicts, described as suspicious individuals at a Cushing pawn shop by Payne County Sheriff’s Investigator Brandon Myers, were arrested by Sheriff’s Deputy Dan Nack, who was in the area and followed their truck that had a muddy unreadable license tag, an affidavit alleged.

The passenger, former Drumright resident Nathaniel Marteze McCormick, 34, listed as homeless in Cushing, and the driver, Andrew Paul Phelps, 36, of Cushing, remain in the Payne County Jail pending their arraignments on Tuesday afternoon.

The pair were arrested about 12:30 p.m. on Friday at East and Walnut Streets in Cushing following the tip from the investigator, who alleged he saw shotgun shells in their belongings, according to Nack’s affidavit.

Nack, who had been given a description of the pair’s truck, could see “the driver reaching in the center area of the seat and focusing in that area instead of the roadway,” his affidavit alleged.

“It appeared that he (the driver) was moving around in that area, at times with both hands. While doing so, the vehicle swerved to the left side of the city street and traveled like this for a while,” the affidavit alleged.

“I activated my emergency lights in an attempt to stop the red Chevrolet single cab truck. It continued west, and the driver continued to reach around and focus in the center area of the seat. When the truck stopped at the intersection of East and Walnut, I honked my horn with my lights to gain their attention,” Nack wrote in his affidavit.

“The driver identified himself as Andrew Phelps. The passenger stated he was Matt McCormick, but said he had no identification…I asked if he was really Nate (Nathaniel) McCormick and he said no,” Nack alleged in his affidavit.

After a dispatcher confirmed McCormick had an outstanding warrant and the deputy reviewed his prior jail booking photo, McCormick admitted his true identity and was arrested, the affidavit said.

“I searched the area where McCormick was seated and quickly located a loaded Hi Standard 9-shot .22 caliber pistol under the passenger side of the seat,” the deputy alleged in his affidavit. The serial numbers of the gun were ground off, the affidavit alleged.

McCormick, who got out of prison in 2018 after serving less than half of a two-year sentence for methamphetamine possession in Cushing, “initially denied knowledge of the gun, but then said he had purchased it this morning for $50. He also stated the meth was his,” that was found in the truck, the affidavit alleged.

“Phelps advised that he knew of the meth in the truck, and also the marijuana. Phelps told me he was messing with the marijuana when he was swerving, which is the suspicious movements that I saw him making in the cab while driving,” Nack alleged in his affidavit.

Phelps got out of prison in 2009 after serving less than half of two concurrent five-year sentences for assault and/or battery with a dangerous weapon and vehicle theft, both in 2005, state Department of Corrections records show.

Four baggies of a substance that field-tested positive as methamphetamine were found in the truck, as well as 1.7 grams of marijuana, the affidavit alleged.