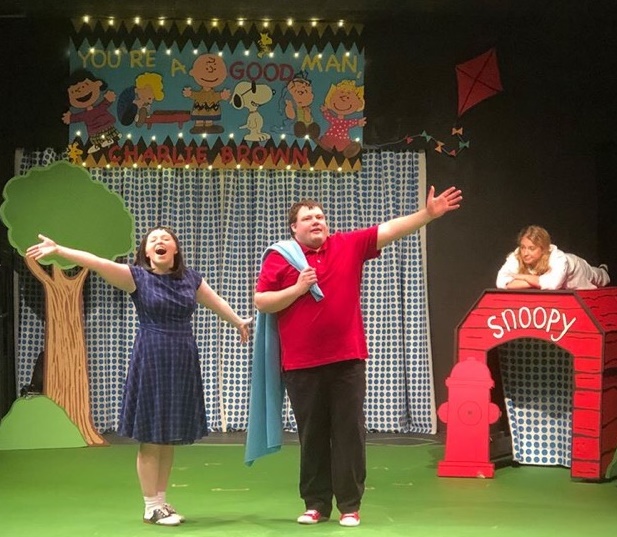 (Stillwater, Okla)   Town & Gown Theatre in Stillwater is proud to present its latest production, “You’re a Good Man, Charlie Brown.” Based on the beloved comic strip by Charles Schultz, this is a fresh approach to the 1967 classic. Sally Brown joins Charlie Brown, Linus, Lucy, Schroeder, and Snoopy in this charming musical revue of vignettes and songs. Follow the gang from Valentine’s Day to the baseball season, from wild optimism to utter despair. This delightful show will leave you with a smile on your face.

Director Jeri Seefeldt has helmed numerous Town & Gown productions. She explains what drew her to this particular show: “We all know about the cartoon strip “Peanuts” created by Charles M. Schulz… This musical has all the enduring qualities that made the comic strip a lasting success. The everyman character of Charlie Brown… And who can’t see the wisdom of a little child that Linus brings to the show? I think you might even recognize yourself and a few others in these adorable characters.”

Mr. Yates is reprising the role of Charlie Brown 16 years after performing it as part of Town & Gown’s previous production of the show. Audiences may also recognize him from his roles as Rooster in “Annie” and Horton the elephant in “Seussical the Musical.” Valerie Thrasher as Snoopy has been performing at Town & Gown since her first role there as a child. Most recently, she has appeared in “Radio Gals,” “Seussical the Musical,” and “Into the Woods.”

Maddy Billings stars as Lucy in her seventh Town & Gown production. She’s appeared recently on the Town & Gown stage as Mary in “It’s a Wonderful Life” and Shelby in “Steel Magnolias.” Landon Greene as Schroeder has previously delighted Town & Gown audiences with his quirky and hilarious roles in “Annie Get Your Gun” and “The Addams Family Musical.” Patrons will recognize Michelle Reetz as Woodstock from her turns as Mrs. Mayor in “Seussical the Musical” and an ensemble cast member in “Annie Get Your Gun.”

Corbett Dalton as Linus is new to the Town & Gown stage but hardly new to theater. He has worked on lighting design and production for several Town & Gown shows since 2017, including “Annie Get Your Gun,” and is a veteran of over 40 shows with various production companies, including the Stagecoach Community Theatre in Perry. Melissa Reed is making her Oklahoma theater debut at Town & Gown in the role of Sally, having recently moved to Stillwater from Oregon. Like Dalton, she is a theater veteran, having appeared as Ariel in “The Little Mermaid,” Morticia in “The Addams Family,” and The Baker’s Wife in “Into the Woods.”

Audiences will remember ensemble member John Mark Day from recent roles as Cinderella’s Prince in “Into the Woods,” David Frost in “Frost / Nixon,” and Mal in “The Addams Family Musical.” Lauren Reece appears in the ensemble of her second show at Town & Gown, having previously played the Moon in “The Addams Family Musical.” Andrea Yough is also a Town & Gown veteran, having appeared as Miss Maudie in “To Kill a Mockingbird,” Silvia Potter-Porter in “Annie Get Your Gun,” Sister Robert Anne in “Nunsense,” and a member of the Mistletones singers in “It’s a Wonderful Life.” Pianist Laura Davis has performed in several previous Town & Gown productions as well, including “Radio Gals,” “The Importance of Being Ernest,” “Annie, Get Your Gun,” and “Nunsense.”

“You’re a Good Man, Charlie Brown” will run for eight performances, from February 7th to the 10th and 14th to the 17th. Thursday, Friday, and Saturday performances begin at 7:30 p.m. and Sunday matinees begin at 2:30 p.m. Tickets will go on sale Monday, Feb. 4th and can be obtained by calling the box office at (405) 372-9122 or visiting the theatre’s Web site at www.townandgown.org. Tickets prices are $14 for adults, $12 for students, and $12 for seniors attending either Sunday matinee.