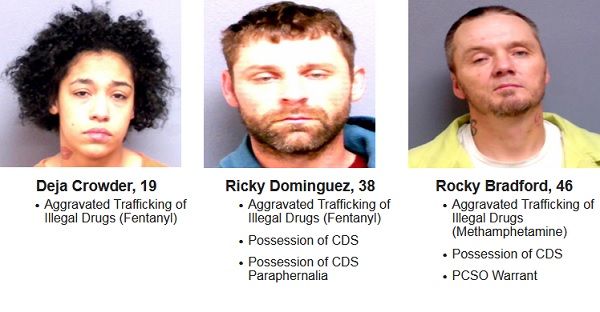 (STILLWATER, OK) – On Thursday, Jan. 12, 2023, members of the Stillwater Police Department (SPD) Special Project Unit arrested Rocky Bradford, 46 of Perry, for an outstanding Payne County warrant. A subsequent investigation revealed that Rocky was also in possession of 6 grams of Fentanyl and 11 grams of Methamphetamine.

On Friday, Jan. 13, 2023, SPD Special Project Unit conducted a traffic stop in the area of Boomer and Lakeview, Deja Crowder was a passenger in the vehicle. The traffic stop investigation led to officers serving a search warrant at Deja Crowder’s residence and seized 12 grams of Fentanyl during the search.

On Friday, Jan. 13, 2023, SPD Special Project Unit conducted a field interview of Ricky Dominguez at the hotel located at 5010 W. 6th Ave. During the interview, officers learned that Ricky Dominguez was in possession of 11 grams of Fentanyl pills.

Illegal Fentanyl is a highly addictive opiate that is plaguing many communities throughout the United States. Fentanyl is extremely dangerous to ingest because it is often made in clandestine labs and there is no control over the potency of the drug.

This is an arrest, not a conviction.