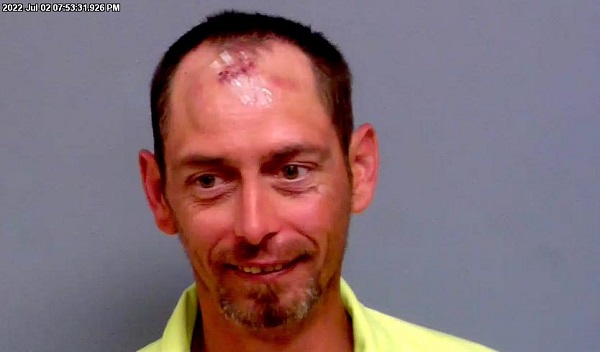 (Stillwater, Okla.) — A Stroud man arrested at Lake Carl Blackwell has been jailed on $5,000 bail pending an Aug. 1 court appearance on charges of kicking OSU Police Officer Aaron Spears on the leg, drunk driving at Highway 51 and Highway 51C, and transporting an opened container of beer, all on July 2.
If convicted of the three-count charge, Jessie Bryan Tull, 36, could be incarcerated for as long as six and one-years, court records show.
At the time of his Payne County arrest, Tull was free on $10,000 bail pending a July 28 preliminary hearing on Pawnee County charges of assault and battery on a police officer, placing a body fluid on a government employee, drunk driving, possessing drug paraphernalia, transporting an opened container of an intoxicating beverage, and speeding in an Oklahoma Highway Patrol case filed on Nov. 22, 2021.
In his latest case, Tull was arrested at 5:25 pm on July 2, about 25 minutes after “Officer Spears advised he was flagged down by a bystander who stated the driver (of a white Ford F-150) had cussed at their kids and was driving drunk,” OSU Police Officer Haley Ceron, who was at the Lake Carl Blackwell office, alleged in an affidavit.
“I caught up to the vehicle at the southbound stop sign at 51C and Highway 51. The driver failed to signal for the turn, made an improper turn, then failed to maintain their lane,” Officer Ceron alleged in his vehicle.
At a traffic stop, “Tull had a noticeable slur when he spoke. I asked Tull if he had been drinking. Tull quickly denied drinking at all,” Officer Ceron alleged in his affidavit.
During field sobriety tests, “Officer Spears asked again if he had anything to drink or had taken any drugs. Tull again denied drinking but admitted to smoking marijuana approximately three hours prior,” the affidavit alleged.
While performing the one-leg stand, “Tull raised his arms for balance, swayed and put his foot down after a few seconds. Officer Spears requested Tull to turn around. Tull turned around and put his hands behind his back before Officer Spears instructed him to do so. Tull was handcuffed without incident and placed in the back of my patrol car.
“As Officer Spears and I began to walk to Tull’s vehicle, I heard multiple loud thuds. Tull began throwing his head into the rear passenger side window. Officer Spears opened the door and tried to get Tull to stop. Tull kicked his legs outside the vehicle and resisted Officer Spears and his instructions to put his legs back in the car.
“While kicking, Tull made contact with Officer Spears. Officer Spears backed up and was able to close the door when Tull pulled his feet in to kick again. Tull continued to bang his head against the window. Officer Spears transported Tull in my unit while I waited for the wrecker to arrive.
“I inventoried Tull’s vehicle and found two beer cans under the front passenger seat,” one unopened and one open,” which was still cold and about 3/4 full, Officer Ceron alleged in his affidavit. “I heard Officer Spears request LifeNet meet him at the jail. Officer Spears advised Tull had now cut his head open from banging it on the window while in transport,” Officer Ceron alleged in his affidavit.
At the Stillwater Medical Center, “I could hear Tull yelling and cussing at the staff in the emergency room. Tull was evaluated and treated by medical staff and was cleared to be transported to the jail. Tull agreed to be transported by myself but would not go with Officer Spears,” Officer Ceron alleged in his affidavit.