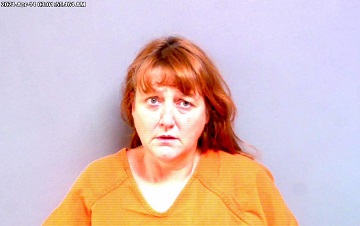 (Stillwater, Okla.) — A Stillwater woman accused of cutting her boyfriend on his arm four to five times with a kitchen knife has been jailed on $5,000 bail pending a court appearance with an attorney on May 12.

If convicted of domestic assault and battery with a dangerous weapon, former Cushing resident Angela Ann Strader, 54, who has also been known by the surnames of Harmon and Shipman, could be incarcerated for up to one year in jail or up to 10 years in prison.

Her boyfriend of two years said that they had been arguing, first at her apartment, then at his on April 13, Stillwater Police Officer Andrew Wilson wrote in an affidavit filed last week.

“When Strader came to his apartment, she argued that (he) had another woman in his apartment and he offered to let her go and look for such a person,” the affidavit alleged.

“After checking the apartment, Strader was able to get into the small kitchen area and retrieve a smaller knife from a butcher block. She used the knife to cut (her boyfriend) several times on the right forearm resulting in a fresh wound. The wound was still bleeding when I arrived on scene,” the officer alleged in his affidavit.

Strader was arrested at her apartment in the 800 block of S. Lowry in Stillwater at 8:45 pm on April 13, according to the affidavit.