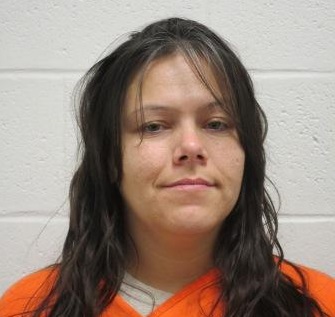 (Stillwater, Okla.) — A Stillwater woman with a history of convictions for drugs and violence has been charged with stealing a man’s truck, leaving the scene of an injury accident, drunk driving, and punching another man in the face, all on July 22 in Stillwater.

Amy May Lakawitz, 36, who got out of prison a year ago, has been jailed on $5,000 bail pending her arraignment Tuesday on the four-count charge filed last week.

Lakawitz has also been known by the surnames of Fearuro, Ferraro, and Fearuro Lakawitz, according to the state Department of Corrections.

Lakawitz was arrested at 400 S. Main in Stillwater on July 22 at 11:23 a.m., eight minutes after Stillwater Police Officer Ricardo Inciarte was dispatched to what was believed to be a non-injury accident in the 400 block of S. Lewis, his affidavit said.

“While enroute I was advised that the female driver of the vehicle that had caused the collision was leaving the scene of the crash,” the officer wrote in his affidavit.

Stillwater Police Assistant Chief Shannon Jordan “came on the radio and stated that he was in contact with the suspect,” the affidavit said.

“As I placed her in the vehicle, I heard (a man) tell Assistant Chief Jordan that she was punching him in the face and calling him” an offensive name, the officer alleged in his affidavit.

The truck, which Lakawitz was driving, left the road, spun, struck a porch support of a house in the 400 block of S. Lewis, went back on the road, headed into an oncoming lane of traffic and hit a vehicle trying to swerve out of the path of Lakawitz’ truck, the affidavit alleged.

“Multiple witnesses saw Amy get out of the driver’s seat of the pickup truck and start walking away. When she was told that she could not leave the scene, she responded that she knew and began to run away,” the affidavit alleged.

“I transported Amy to the SPD jail and upon arrival Amy was asleep on the floor of the patrol car. She had to be physically removed from my vehicle,” and refused the breath test for the presence of alcohol, the officer alleged in his affidavit.

The owner of the truck that Lakawitz was driving said that he did not know her, the affidavit alleged.

According to court records and the DOC, Lakawitz was previously convicted of:

* assault and battery with a dangerous weapon and drug possession in Payne County in 2011 for which she was sent to a regimented prison treatment program in 2011, followed by probation that was revoked in January of 2013 to a 20-year prison term of which she served six years and four months before she was released in June of 2019;

* domestic assault and battery with a dangerous weapon in Payne County in 2012 for which she was given a concurrent 15-year prison term in January of 2013 that she discharged in about five years;

* second-degree burglary in Payne County in 2013 for which she was given a concurrent 15-year prison term in January of 2013 that she discharged in about five years;

* methamphetamine possession in Payne County in 2011 for which she was given a concurrent 10-year prison term in January of 2013 that she discharged in three and one–half years;

* manufacture of methamphetamine in Payne County in 2009 for which she was originally given probation that was revoked in January of 2013 to a concurrent 15-year prison term that she discharged in four and one-half years;

* drug possession with intent to distribute in Grady County in 2005 for which she was originally given probation that was revoked in 2006 to a two-year prison term of which she served eight months.