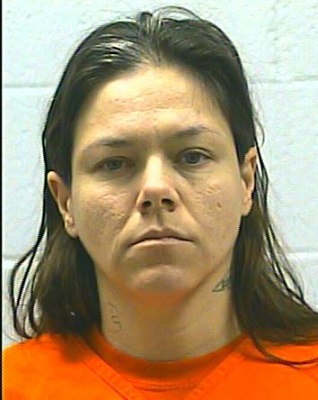 (Stillwater, Okla.) — A Stillwater woman with a history of violent crimes has been jailed on $125,000 total bail pending a July 11 court appearance on charges of repeatedly abusing her male partner since she was released from prison eight months ago.
If convicted of four counts of domestic assault and battery after multiple prior felony convictions, Amy May Lakawitz, 37, who has also been known by the surname of Ferraro, could be given four life prison terms, court records show.
In charges filed on June 7, Lakawitz was accused of using a tire iron to hit her boyfriend in the leg and arm, as well as a knife to poke him in the side and face on June 5. Lakawitz was also accused of biting him on the chest, pulling out his hair, and after pushing him to the ground, sitting on his trunk and choking him, also on June 5.
In another charge filed on June 7, Lakawitz was accused of hitting her boyfriend in the face, scratching him on the back and trunk, biting him on the back, and striking him in the legs and chest with a keychain on April 22.
In charges filed on March 24, Lakawitz was accused of hitting and scratching her boyfriend in the face and on the back, as well as resisting arrest by Stillwater Police Officers Daryle Gee and Josh Rudluff, all on March 16.
In other charges filed on June 7, Lakawitz was accused of driving under suspension, possessing the drugs methamphetamine and marijuana, having drug paraphernalia and transporting an opened container of an alcoholic beverage, all on June 3.
According to the state Department of Corrections and court records, Lakawitz had been released from prison last October to 11 years of probation after serving 10 months in a regimented training program for car theft and a hit and run injury accident in Stillwater in 2020.
In 2013, Lakawitz had been given two concurrent 15-year prison terms for domestic assault and battery with a dangerous weapon in 2012 and second-degree burglary in 2013; at that court appearance her 20-year probation for assault and battery with a dangerous weapon in 2011 and 15-year probation for manufacturing methamphetamine in 2009 were revoked. She served about six years of those concurrent prison sentences from Payne County.
Lakawitz also served eight months of a two-year prison term for possessing a drug with intent to distribute in Chickasha in Grady County in 2005, DOC records show.