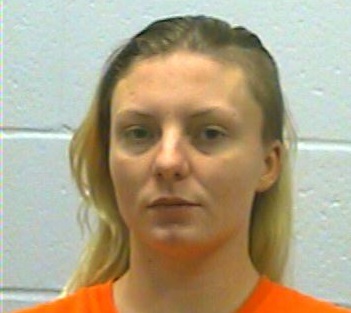 (Stillwater, Okla.) — A 28-year-old Stillwater woman, who served nine concurrent five-year prison terms for multiple crimes in Perkins and Stillwater, has been ordered to appear in court on June 7 on felony charges of breaking into three storage units in Stillwater.

Katy Ann McCullough, who has also been known by the surname of Cunningham, was arrested on April 7 and released from jail the same day on $10,000 bond, court records show.

McCullough is currently on 10 years’ probation on deferred sentences for possessing methamphetamine, a stolen vehicle, and a taken debit card, all in 2015 in Oklahoma City when she lived in Mulhall, court records show.

Since she has nine prior felony convictions from Payne County, McCullough could be given as much as three life prison terms if convicted of three counts of second-degree burglary.

Stillwater Police Officer Chance Whiteley was sent to Patriot Mini Storage on N. Washington on Monday, March 8 on a report that three storage units had been burglarized on Saturday morning, March 6, according to his affidavit.

The business owner said “they had several surveillance cameras which caught the suspect in action. I viewed the footage and immediately recognized the vehicle,” as one consistently located in front of McCullough’s residence, the officer alleged in his affidavit.

“I then saw a female exit the vehicle and on multiple occasions would look directly at the camera. She would drive to a unit and angle the vehicle and open the doors to attempt to block her activity from the cameras. You could see her approach various storage units and a few moments later, squat down as if to open the roll-up doors. On one unit, she made several trips back and forth from inside the unit to her car,” the officer alleged in his affidavit.

The officer drove straight to McCullough’s residence where he saw the vehicle parked — with McCullough sitting in the front seat with the door open, his affidavit alleged.

“She began to cry and told me she just needed money for rent and made a bad decision. I asked if she chose that particular storage unit for any reason, and she said it was a random choice. I asked if she only targeted units with padlocks instead of disc locks since they are easier to cut, and she said that was correct. She said she cut locks and entered several units, but only removed items from one unit,” the officer alleged in his affidavit.

“I asked where the stolen property was and she said it was in the back of the car in which she was sitting. She got out and opened the back hatch. She pointed out a large brown box, a generator, an air tank, and a paintball gun with accessories. She then pointed at a black tote sitting beside her house, which she said also came from the storage facility burglary. She helped me load all of those items into my vehicle.

“While looking through her vehicle for stolen items, she moved a coat and I saw a set of bolt cutters lying next to the driver seat. I asked if those were what she used to cut the locks, and she said it was,” the officer alleged in his affidavit.