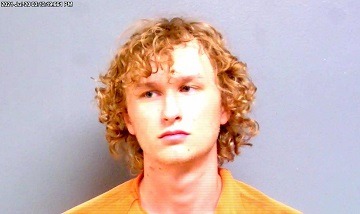 (Stillwater, Okla.) — A Stillwater teenager accused of endangering his girlfriend and her younger brother by firing a pistol from a car, possessing two guns after having been adjudicated as a delinquent child, and possessing Xanax pills with intent to distribute has been jailed on $150,000 bail pending an Aug. 2 court appearance.

If convicted of his four-count felony charge, Jacob Louis Scott, 18, could be given two life prison terms plus 17 years, court records show. If convicted of an additional misdemeanor charge of domestic assault and battery on his 19-year-old girlfriend by slamming her onto a bed, Scott could be given a one-year jail term.

Scott was arrested at 2:25 pm on July 20 in a car at an apartment complex parking lot at 320 E. McElroy — where he had allegedly gone to locate and shoot his girlfriend’s father, according to Stillwater Police Lt. Kyle Bruce.

“Scott was a passenger in the vehicle and was located with a loaded AR-15 in his lap,” Bruce alleged in a news release.

“The juvenile driver of the vehicle was also arrested and held on complaints of obstructing an officer and possession of Xanax with intent to distribute,” the news release said.

Stillwater Police Detective Cody Manuel alleged in an affidavit that officers were sent at 7:46 am on July 20 “regarding Jacob Scott having assaulted his girlfriend outside of the city and possibly following her to her home.

“As officers were on the way, dispatchers updated that Scott had arrived at the house and they received reports of shots fired in the area.”

His girlfriend told police “she spent the night at his home where he lives with his parents the prior night. During the early morning, the two began to argue and then (she) was physically attacked by Scott.

“(She) was able to flee the scene, but Scott broke the windshield out of her vehicle with a pipe as she left.

“Scott produced what was described as a dark-colored semi-automatic pistol and fired at least one round in the air.

“He asked (her 16-year-old brother) if he wanted to get shot and pointed the pistol in the direction of (his girlfriend and her brother) and fired another round.

“(Her younger brother) ran to avoid being shot while (she) continued to argue with Scott as he fired additional rounds in the area and drove away while shooting in the air out of his car window,” the affidavit alleged.

At that point, “Officers searched for Scott or his vehicle at several locations, but were unable to locate him,” until at 2:25 pm police were sent on report that Scott was in the apartment complex on E. McElroy, the affidavit alleged.

His girlfriend’s father “had confronted Scott via phone and Scott had shown up looking for him. Deputies and officers conducted a felony stop on a vehicle leaving the complex.

“Scott was the front-seat passenger in the vehicle. He had an AR-15 pistol sitting between his legs,” the affidavit alleged.

“At the time of his arrest, Scott was in possession of 88 Xanax pills, which he does not have a prescription for. He later admitted that he sells Xanax to make money.

“Detectives later followed up at an address where Scott was reported to have stashed the pistol involved in the shooting. A Sig 365 pistol was recovered at this location,” the affidavit alleged.

“Scott told detectives he had physically assaulted (his girlfriend) at his home before going to her home with a pistol. He fired several rounds including one at the feet of (his girlfriend). He then fled the area and hid in Oklahoma City before returning to Stillwater in the afternoon.

“Scott said he stashed the pistol used in the shooting at a friend’s house and obtained an AR-15 due to an argument with (his girlfriend’s) father via phone. He then went to 320 E. McElroy to find (her) father and intended to shoot him if he could find him,” the affidavit alleged.

“Scott is an adjudicated juvenile felon in Payne County for attempted first-degree burglary, assault with a dangerous weapon, attempting to escape, pointing weapons at others, attempting to elude, etc.,” the affidavit alleged.

In another affidavit filed with the felony case, his girlfriend told Stillwater Police Detective Richard Alley on July 20, “Scott got mad at her this morning when she refused to have sex with him,” and a physical domestic occurred, but she managed to get away and drive to her home.

“(She) stated she thought the bullet passed to the right of her,” the affidavit alleged.