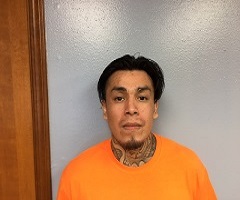 (Stillwater, Okla.) — A Stillwater man serving a six-year prison term for punching a Payne County jailer in the area of his left ear has pleaded no contest to choking his wife and guilty to holding her on the ground, punching her in the face, and biting her on the ear while she was holding her infant son.

William Lee Beard II, 27, was in the Payne County Jail on charges of committing domestic violence against his wife on June 18, 2017, when he attacked the detention officer on July 27, 2017, during a check for tobacco, which is considered contraband in custody, court records show.

On his release from prison, Beard will be on probation for eight years for attacking the jailer.

In his domestic violence case, Beard was sentenced last week by Associate District Judge Stephen Kistler, who ordered him to take a 52-week batterers’ intervention class as a condition of a concurrent five years of probation for choking his wife.

Beard was also ordered to take parenting classes as a condition of a concurrent one-year suspended sentence for beating his wife in the presence of her baby boy.

According to court records and the state Department of Corrections, Beard has also previously been convicted of:

* grand larceny in Cleveland County in 2012, for which he received a five-year prison term in 2013 and served about half of it;

* possessing a stolen vehicle in Logan County in 2012, for which he received a concurrent five-year prison term in 2013 of which he served about half, followed by five years of probation that was revoked in full in 2017; his Payne County sentence for attacking the jailer was ordered in 2018 to be served concurrently to his Logan County sentence.