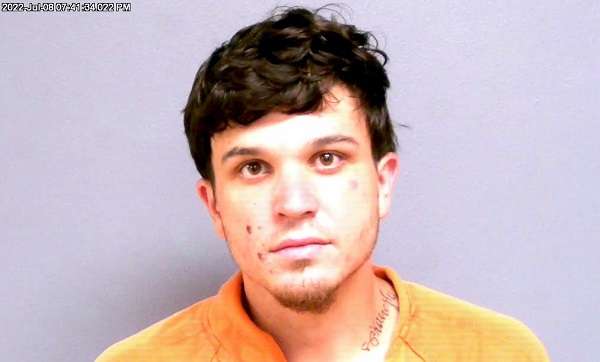 (Stillwater, Okla.) — A 25-year-old Stillwater man has been jailed on $40,000 bail pending his arraignment today on charges of trying to kick open the front door of a house occupied by his ex-girlfriend and her companion, possessing a gun during a burglary attempt, and breaking into a vacant unit at Oakridge Trailer Park.
If convicted of the three-count charge, Vincent Kale Sierra could be incarcerated for as long as 21 years, according to court documents filed last week.
Stillwater police had been sent on July 7 to the 3100 block of E. Raintree on a report that “a male armed with a pistol was kicking the door and attempting to gain entry,” Officer Newly McSpadden wrote in an affidavit.
“I had been made aware shortly before this time that Vincent Sierra was walking in the area and was armed with a pistol,” the officer alleged in his affidavit.
“The suspect ran west from Eastgate Street just on the north side of the trailers along Raintree Drive,” where the Special Operations Team was activated to attempt to locate him, the affidavit alleged.
Officer Alonzo Cordova went to the residence of Sierra’s ex-girlfriend, who said “Vincent came to the door and began kicking the door in an attempt to get in,” the affidavit alleged.
She and her male companion said, “They were able to look outside and see Vincent had a pistol in his hand while kicking the door. When I listened to the 911 call made by (the man), I can hear a person outside yelling and then you can hear a female (the ex-girlfriend) telling Vincent to get away from her, while she is crying,” Officer McSpadden alleged in his affidavit.
The man said, “the only reason Vincent did not get into the residence is because they had barricaded the front door by placing a couch in front of it,” the affidavit alleged. Officer Cordova stated, “he could see where the door frame had been broken due to the attempted burglary,” the affidavit alleged.
At 5:30 pm, Officer McSpadden received an anonymous tip that the suspect was in a trailer, which police then surrounded and removed all the occupants, the affidavit said.
“These occupants admitted Vincent had been at the trailer hiding for a short amount of time, but they kicked him out and he was no longer there. During this time, it was discovered the adjacent trailer is supposed to be vacant,” which the trailer park manager gave police permission to enter, the affidavit alleged.
Police made “numerous announcements before entering the trailer, but no one responded from inside the trailer,” where Sierra was eventually found in a bathroom — with a semi-automatic pistol lying adjacent to the area of his arrest, the affidavit alleged.
“There was no electricity inside the trailer; therefore, Vincent had taken all of his clothes off except his underwear. Vincent was extremely sweaty at the time of arrest due to being hidden in the trailer for an extended amount of time,” the affidavit alleged. Sierra was arrested at 6:35 pm and taken to the City of Stillwater Jail for booking, the affidavit said.