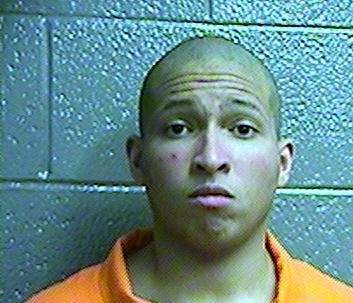 (Stillwater, Okla.) — The admitted gunman, who fatally shot a man and wounded two women in a marijuana-related robbery in 2017 at a Stillwater home, has avoided a jury trial by accepting a plea bargain for three concurrent 20-year prison terms, court records show.

Rodriguez Cortez Johnson Jr., 23, of Stillwater, who was originally charged with first-degree murder during an armed robbery, pleaded guilty on March 12 to a reduced charge of second-degree murder for which he was given 20 years in prison followed by 10 years of probation by District Judge Phillip Corley, who gave him two concurrent 20-year prison terms for wounding the two women.

Johnson had also pleaded guilty to shooting a .380 caliber pistol with intent to kill two women, who knew Johnson and his original co-defendant, Shakeem Rachid Carter, 26, of Stillwater. Carter avoided a jury trial in 2018 on first-degree murder by pleading guilty to a reduced charge of conspiracy to distribute marijuana, for which he was given an eight-year prison term two years ago.

The homicide victim, Christian Peck, 21, of Stillwater, was shot multiple times in the head and torso at about 10 p.m. on March 4, 2017, after Peck reportedly brought marijuana in a duffle bag to the home of two Stillwater women, an affidavit said. Peck was flown to St. John’s Medical Center in Tulsa where he was pronounced dead the following day, an affidavit said.

Both women said that Johnson was the only gunman, the affidavit said. Johnson was arrested on March 7, 2017, at a house in Raton, New Mexico, police said.

Carter was arrested at a mobile home south of Stillwater on March 7, 2017, after being located there by Stillwater police and Payne County sheriff’s deputies. Melissa Kay Butler, then 33, who lived at the mobile home, pleaded guilty to harboring Carter as a fugitive, for which she was given a six-year deferred sentence that was changed in 2019 to a six-year suspended sentence for probation violations including testing positive for methamphetamine.

One of the homicide victim’s brothers wrote a letter to the judge, which was filed in court records, asking that Johnson be given life in prison without parole. “I have seen him smile in court like he doesn’t even care about the lives he almost took, the life he did take, or the people he has affected. He is a murderer plain and simple.”

Another relative wrote a letter to the judge: “Justice will have not been properly served if the evil man who pulled the trigger gets off easy.”

One of the wounded women told the judge in a letter: “Everywhere I go I carry scars on my hands and paranoia for my safety. I have an escape plan at any moment.” Addressing Johnson, she wrote, “You deserve the bed you’ve made for yourself.”

Nine months after the 2017 slaying, Johnson’s probation for possessing marijuana with intent to distribute in Stillwater in 2015 was revoked to a 15-year prison term, state Department of Corrections records show. Johnson’s probation for two second-degree burglaries in Stillwater in 2015 was also revoked to two concurrent seven-year prison terms, for which he had been sent in 2016 to the Regimented Inmate Discipline (RID) boot camp program.