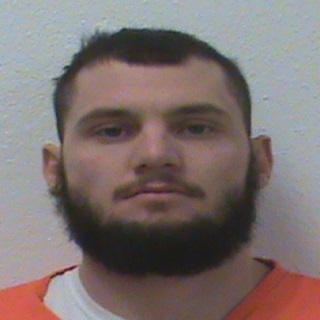 (Stillwater, Okla.) — An ex-convict appeared before a judge Monday by video from the Payne County Jail where he is being held on $75,000 bail on a charge of stalking his ex-wife by repeated telephone calls and text messages, by confronting her at her Stillwater apartment and by damaging her vehicle, all while she had an emergency protective order against him.

Cody Lynn VanDusen, 27, of Stillwater, who was released from prison two years ago, has been ordered to again appear before a judge on April 20 when he can seek a preliminary hearing on his felony charge punishable by as much as a five-year prison term on conviction.

In a petition for an EPO in January, his ex-wife wrote “Cody and I have a child together, but have not been together for three months. I previously had an EPO due to Cody using drugs in front of my daughter, but he promised rehab so it was dropped. We have not lived together for over six months.

“He does live across the hall with his mother in a different apartment. It has been months of (him) hiding outside waiting for me to come out, calling numerous times every day and texting. Anytime I leave in the evening, he jumps on my car or tries to rip my battery out. He has put sugar in my gas tank so I couldn’t leave.

“On Jan. 9 I was trying to leave and he jumped on my car and finally jumped down and stabbed my tire…He has tried to attack any person who comes to my apartment and follows me if I leave alone. Cody has called me 20 times on the Thursday of this incident.

“He has messaged and told me he has a GPS tracker on my phone and my car. I have tried to communicate about our children, but it always turns to who I’m seeing and how he is going to fight them too. Jan. 9 he texted me 15 times threatening and begging to talk from his number and other text numbers.

“I need the protective order because I fear for my safety and my children’s safety. I want the harassment and constant stalking to stop.”

The EPO his ex-wife sought was issued on Jan. 16 and served on VanDusen the next day by a Payne County sheriff’s deputy, Stillwater Police Detective Mary Kellison wrote in an affidavit.

According to court records and the state Department of Corrections, VanDusen had been previously convicted of:

* drug possession in Pawnee County in 2014, for which he was given in 2015 a five-year prison term, but he served less than three years before he was released in February of 2018;

* conspiracy to commit a felony in Osage County in 2013, for which he was originally placed on two years’ probation in 2014 that was revoked in 2016 to a two-year prison term concurrent to his above Pawnee County sentence;

* knowingly concealing stolen property and second-degree burglary in Pawnee County in 2011, for which he was originally given 130 days in prison in 2011 that was later changed to two concurrent prison terms of four years and 11 months in 2015, but he served only one year and four months;

* second-degree burglary and knowingly concealing stolen property in Pawnee County in 2011, for which he was originally given probation in 2011 that was changed to six years and 11 months in prison in 2015, but he only served about two years.