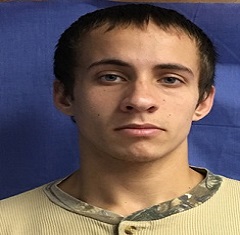 (Stillwater, Okla.) — An Oilton man, who pleaded guilty to indecent exposure at Oklahoma State University in Stillwater two years ago, has been accused of violating his probation in his Payne County case by committing indecent exposure in Tulsa County, court records show.

Kirk William Tootle, 24, was being held in the Payne County Jail today on $5,000 bail pending his arraignment this afternoon on his alleged probation violation, court records show.

Two months ago, Tootle pleaded guilty to indecent exposure in Sand Springs on July 25, 2018, for which he was ordered to serve four months in the Tulsa County Jail, with credit for the time he had already been held there, followed by three years and eight months of probation, court records show.

For his alleged Payne County probation violation, Tootle was arrested in Tulsa last week and taken to the Payne County Jail on Aug. 15, court records show.

Two years ago, Tootle admitted that he had exposed his private parts to a woman at about 2:35 p.m. on Sept. 12, 2016, in the Payne County incident investigated by OSU Police Officer R. Billy Covington.

Tootle was ordered by Payne County District Judge Phillip Corley on Aug. 25, 2017, to register as a level one sex offender for 15 years, have random drug tests, complete a mental health evaluation as well as any follow-up treatment, provide a DNA sample, and complete recommended sex offender treatment, court records show.

Tootle also was ordered to pay a $250 fine and a $100 assessment to the victims’ compensation fund, as conditions of a three-year suspended sentence in his Payne County case.

According to the OSU police officer’s affidavit, a 39-year-old woman said that while she was walking on her afternoon break, she was approached by a white man in a maroon Chevy SUV.

“The driver motioned for her to stop as though he was going to ask a question,” the affidavit said.

When the woman removed her headphones, the suspect asked her for directions to the library, the affidavit said.

As the woman was moving toward the SUV to give the man more detailed directions on how to get to the library, “she noticed the suspect inside the SUV was ‘touching his penis,'” the affidavit said.

She said that she “immediately walked away and the suspect drove west through OSU parking lot #62,” the affidavit said.

About an hour earlier, Tootle was scheduled to appear in court before another Payne County judge on a misdemeanor charge of shoplifting a computer charger from the Cushing Walmart on Dec. 11, 2015.

Tootle did appear on Sept. 12, 2016, and enter a guilty plea to that charge for which he was placed on probation for one year with an order to perform 16 hours of community service along with paying a $250 fine, court records show.