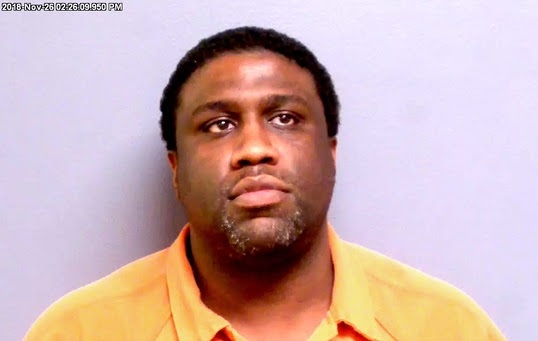 Posted on December 3, 2018
(Stillwater, Okla.) – A reward of up to $5,000 has been offered by the U.S. Marshal’s Service for information leading to the arrest of a convicted murderer, who escaped from the Payne County Jail last Thursday night by assuming another inmate’s identity with the alleged aid of an Edmond woman.
Patrick Marteaz Walker, 34, who was serving a life sentence at the Oklahoma State Penitentiary for first-degree murder in Oklahoma City committed at age 17, had been brought to the Payne County Jail for arraignment on a charge of attacking a guard at a Cushing private prison where he was previously held.
Walker’s escape at 9 p.m. on Nov. 29 was accomplished by identity theft with the help of Meagen Ashley Ward Hughes, 28, who was accused of having arranged for bond for another inmate whose identity Walker assumed — before he walked out of the jail and left with her in a car, court documents allege.
An arrest warrant was issued Friday for Hughes on charges of conspiring with Walker for him to impersonate another inmate and help Walker escape from the Payne County Jail. If convicted of conspiracy and escape, Hughes could be incarcerated for 17 years.
According to an affidavit by Payne County Sheriff’s Investigator Brandon Myers, at 2:35 p.m. on Nov. 29 a bondsman was contacted by Hughes to bond out another inmate, Charles Pendarvis.
“The bondsman and Meagen (Hughes) met, filled out paperwork, and the bondsman posted the bond for Charles Pendarvis,” the affidavit alleged.
“When jail staff called and pulled for Pendarvis, Patrick Walker took on his identity. The jail staff released Walker under Pendarvis’ name,” the affidavit alleged.
Walker walked out of the jail at 9 p.m., met with the bondsman and signed paperwork – as Patrick Walker, yet the bondsman did not catch it, the affidavit alleged.
“We learned that Patrick Walker threatened Charles Pendarvis with harm to his family if he did not comply with the scheme,” the investigator alleged in his affidavit.
“We located phone calls between Patrick Walker and Meagen Hughes on the jail phone system,” as well as a video of her on the previous day in the courthouse with known associates of Walker, the affidavit alleged.
Hughes filled out the bondsman’s paperwork using Pendarvis’ information in detail that could have only come from Pendarvis and Walker, the affidavit alleged. She paid the bondsman $1,500 in cash to post bond for Pendarvis, the affidavit alleged.
“The bondsman told us that Meagen and Patrick left together in the same car,” the investigator alleged in his affidavit.
“We also learned that Patrick Walker smuggled a cellular telephone into the jail and used it several times to communicate with unknown individuals,” the investigator alleged in his affidavit.
Pendarvis said that he did not know Hughes, according to the affidavit.
“We learned that Patrick Marteaz Walker had made arrangements with Meagen Hughes and other co-conspirators while in the Payne County Jail,” the investigator alleged in an affidavit filed with Walker’s escape charge.
The day before his escape, Walker was arraigned on a charge of punching a guard in the face at the Cimarron Correctional Facility in Cushing last spring when he was being held there, court records show.
The guard had reported to Cushing police on May 1 that on April 26 at about 2:15 p.m. “he was walking out of ‘Echo Charlie’ and into the ‘Rotunda’ and was hit in the face by Inmate Walker,” who jumped on his back after he fell to the ground, an affidavit alleged.
The guard said “Inmate Walker was then sprayed and it was over,” the affidavit alleged. The guard had a broken tooth in the front of his mouth and the left side of his face was red, the affidavit said.
According to Oklahoma County court records and the state Department of Corrections, Walker was 17 when he was charged with first-degree murder in Oklahoma City on Nov. 4, 2001, and 19 when he was convicted by a jury that recommended he be given life in prison.
Walker was 17 when he was previously charged on March 14, 2001, in a shooting in Oklahoma City, and 19 when he was convicted of the lesser included offenses of two counts of assault and/or battery with a dangerous weapon, along with a gun charge, for which he was given three concurrent 10-year prison terms consecutive to his life sentence, court records show.
Walker was 19 in 2003 when he was convicted of possession of cocaine with intent to distribute in Oklahoma City in 2002, for which he was given a concurrent 10-year prison term, court records show.
In a news release today from the Oklahoma Department of Corrections, Walker, who is considered armed and dangerous, was described as black, 5’7”, 174 pounds, with black hair and brown eyes, as well as a large scar on the left side of his face near his jawline.
“Oklahoma Department of Corrections Fugitive Apprehension and Investigations agents are working with fugitive task forces in several states to bring Patrick Walker into custody,” the news release said.
“The U.S. Marshal Service has adopted the case, and issued a reward of up to $5,000 for information leading to Walker’s arrest.
“Call 1-877-WANTED-2 or 1-877-926-8332 or email [email protected]. All callers and e-mailers can remain anonymous,” the news release said.
“Anyone with information can call our escapee hotline at 405-425-2698 or email [email protected]. All calls and emails are confidential,” the DOC news release said.
***