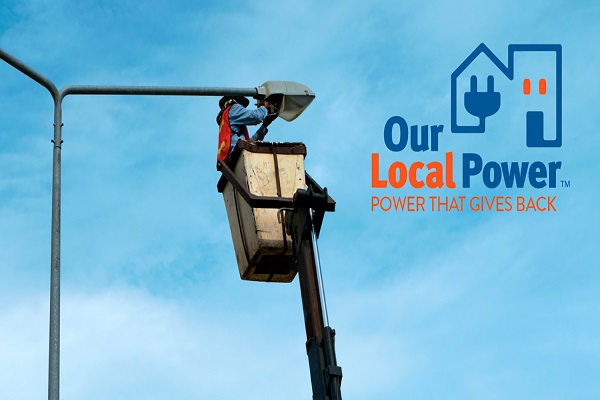 National Public Power Week 2019 (October 6-12) is a great time to recognize the benefits of local control and local ownership of the municipal electric utility system.
Posted on September 30, 2019

(Vinita, Okla) — What do Cushing, Oklahoma; Los Angeles, California; and Memphis, Tennessee have in common?

Along with 2,000 other cities and towns across the United States, they are all “public power” communities. These are communities that own and operate the local municipal electric distribution system and supply electricity to homes and businesses across the community at not-for-profit rates.

Defined by local ownership and local control, public power systems are also noted for high reliability, community focus and customer responsiveness. It is all part of the plan when the local system is custom-fit to meet local needs and the employees who operate and maintain the system also call the community home. That is the case in most of the public power systems across the country.

These are all key reasons why public power is alive and well today all across the nation, and right here in Oklahoma. Some public power systems are large (like San Antonio, Texas or Orlando, Florida), some are much smaller but all are owned and operated by the citizens of the community.

In Oklahoma, there are 63 public power systems, including Cushing. Since 1953, Cushing has purchased its wholesale electricity from the Grand River Dam Authority (also a public power utility) as part of a beneficial partnership that has always existed to serve the citizen-owners.

Each year, the American Public Power Association (APPA) recognizes the first full week of October as “National Public Power Week” and uses the occasion to promote the benefits and historic successes of publicly-owned electricity utilities. Headquartered in Washington, D.C., APPA is the service organization for the nation’s community-owned electric utilities. GRDA President/Chief Executive Officer Dan Sullivan helps guide the organization by serving on the APPA Board of Directors.

The relationship between GRDA and its public power partners works like this: GRDA sells wholesale electricity to these communities. In turn, these cities use the municipally-owned electric utility system to distribute that power to the end-user homes and businesses all across town. The revenues generated from those electricity sales are used to operate and maintain the distribution system, purchase more power from GRDA and support other city services, like streets and parks, police and fire protection. All that is done without using tax dollars.

“GRDA wants to recognize public power week because we understand how important the public power model is to the communities we serve and the thousands of Oklahomans who live in those communities,” said GRDA Vice President of Corporate Communications Justin Alberty. “Most of our partnerships with these communities are over 60 years old but the benefits of public power are as strong as ever.”

Headquartered in Vinita, GRDA is Oklahoma’s state-owned electric utility; fully funded by revenues from electric and water sales instead of taxes. Each day, GRDA strives to be an “Oklahoma agency of excellence” by focusing on the 5 E’s: electricity, economic development, environmental stewardship, employees and efficiency.

Editor’s note:  Justin Alberty will be a guest on HOME w/the KUSH Girls, Friday, Oct 4th @ 9 am  Tune in to hear all about GRDA and Public Power Week.