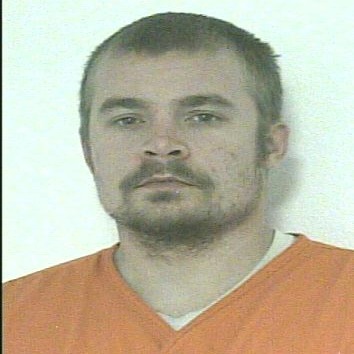 (Stillwater, Okla.) — A repeat drug offender from Perkins has been ordered held on $50,000 bail on charges of breaking into a truck in Stillwater and being a felon in possession of a pistol — two months after he was released on bond from jail on charges of possessing methamphetamine, clonazepam and sublingual with intent to distribute, along with having drug paraphernalia.

Due to his extensive felony record including property crimes in Payne County, John Thomas Helfrick Jr., 29, who got out of prison 10 months ago, could be given as much as two life prison terms plus 11 years of incarceration if convicted of his current charges on which he has been ordered to appear in court on March 1.

Helfrick’s latest arrest came at 4:55 pm on Jan. 11 in a parking lot on W. 6th Street — 15 minutes after Stillwater police were sent to the 300 block of S. Monroe on a report that a white man with a green hoody took a .45 caliber pistol from a pickup and was last seen southbound on Monroe, an affidavit alleged.

“He was walking behind the house on the northeast corner of 6th and Blakely. Once the subject saw me, he walked in a circle and then turned back toward 6th and almost stumbled into the highway as I turned onto Blakely. I had looked back to see which direction he was going,” Stillwater Police Officer Terry Low wrote in an affidavit.

“I turned around and watched the male run across the highway, and traffic had to stop to prevent from hitting him. I observed him cross the road and I pulled into the parking lot of the Stillwater Cancer Center at 1201 W. 6th,” Low wrote in his affidavit.

After Helfrick began running to the south, “I immediately began chase and removed my ECW (taser) and told him he better not run or I was going to tase him. The male continued to run and I told him ‘I’m going to f……tase you, you better stop!’ I told him to get on the ground and the subject immediately dropped to the ground saying ‘I’m sorry,"” Low alleged in his affidavit.

When Helfrick was searched for weapons, “In his right front pocket, I removed a radar detector with the charger, and then I rolled him to his right side and removed a black Kimber .45 pistol from his front left pocket. I then removed the magazine and then made sure the gun was safe and removed a live round from the chamber,” Low alleged in his affidavit.

While the officer was waiting on a criminal history check, “Helfrick stated ‘This is it.’ When asked what he meant by that, he never responded… I removed another Kimber magazine and several .45 caliber rounds in his pocket,” Low alleged in his affidavit.

At the time of that Jan. 11 arrest, Helfrick was free on $50,000 bond on charges of possessing methamphetamine, clonazepam and sublingual with intent to distribute, as well as having drug paraphernalia described as a marijuana smoking pipe with residue, syringes and zip lock baggies, after a Nov. 19, 2020, stop on a car in which Helfrick was a passenger, court records show.

According to Payne County court records and the state Department of Corrections, Helfrick had previously been convicted in Payne County of:

* burglary of a pickup in Stillwater in 2017 for which in 2018 he was given an eight-year prison term of which he served two years before his release on April 1, 2020;

* false personation in Stillwater in 2017 for which he was originally given five years of probation, but when he was terminated from Drug Court two weeks later, his sentence was changed in 2018 to a concurrent prison term of four years and 10 months;

* concealing stolen property in Stillwater in 2016 for which he was originally given the same probation as above that was changed in 2018 to a concurrent prison term;

* possessing of the drug alprazolam in Stillwater in 2016 for which he was originally given the same probation as above that was changed in 2018 to a concurrent prison term;