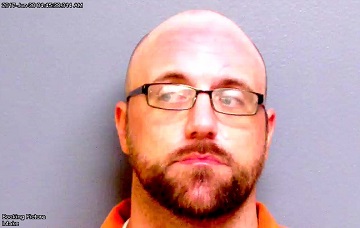 (Stillwater, Okla.) — A Perkins man on probation for methamphetamine and property crimes has been jailed on $100,000 bail on charges of attempting to break into a rural Stillwater man’s house while it was occupied at 11:34 pm on Aug. 11 and burglarizing the owner’s attached garage on Aug. 12 at 5 am and at 6:05 am.

Jonathon Koppell, 36, who has also been known by the surnames of Keppell and Koppel, has been ordered to appear in court with an attorney on Sept. 13 on a three-count felony charge.

The property owner’s first video had “a good view of the suspect’s face and an identifying cross tattoo on his left forearm,” when an attempt was made to enter the house by a side door before the suspect noticed the camera and backed away, the affidavit alleged.

“Following the tracks on scene, it appears the suspect parked off of Brush Creek and walked onto the property,” the affidavit alleged. The stolen bicycles were described as a white Trek woman’s Marlin 5 with turquoise letters, and a deep copper and maroon Trek Fuel EX 7, the affidavit said.

The suspect, also known as Jonathan Joseph Paul Koppel, had been placed on three concurrent terms of five years’ probation in 2019 for possessing methamphetamine with intent to distribute in 2016 in Stillwater, second-degree burglary of a rural Payne County barn from which $4,013 worth of property was taken in 2017, and possessing a car in 2018 in Seminole that had been stolen in Stillwater, court records show.