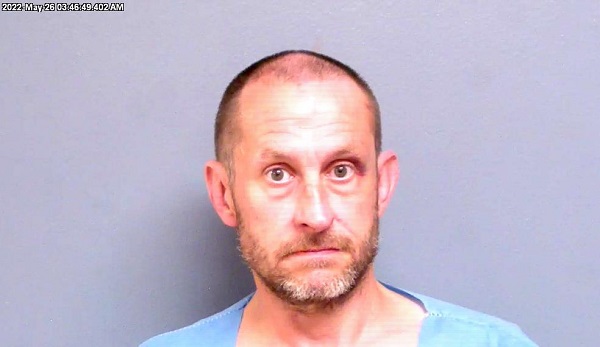 (Stillwater, Okla.) — A Perkins man accused of repeatedly stabbing a man inside a Stillwater apartment, pushing a woman against a brick wall, and grabbing her cell phone while she was trying to call 911 was arraigned Thursday by video from the Payne County Jail on a three-count charge.
Neither the victim nor the suspect apparently lived in the apartment, which they had entered through an open door, court records show.
The victim, identified as Zachariah Anderson, was taken by ambulance to the Stillwater Medical Center and then transferred to another hospital due to the severity of his injuries, an affidavit said.
The suspect, Kevin Patrick Dalton, 44, was arrested at another location about 30 minutes after officers had been sent to an apartment in the 100 block of S. Burdick in Stillwater at 8:10 pm on May 25, according to an affidavit filed last week. The suspect was ordered jailed on $40,000 bail.
Two officers were with the stabbing victim and “rendering aid while waiting for paramedics,” at the apartment when Stillwater Police Officer Trevor Meridith arrived, his affidavit said.
“I observed what appeared to be blood in multiple places on Anderson’s upper body, but it was difficult to tell exactly where he’d been stabbed. I also observed multiple small puddles of blood within the apartment on the floor directly in front of where Anderson was sitting,” the officer wrote in his affidavit.
A black-handled filet-type knife was on the floor in blood puddles; another folding knife was taken out of Anderson’s pocket, the affidavit alleged.
The resident told police that he “was standing on the living room side of the island that separates the living room and dining room/kitchen in his apartment when the assault occurred,” the affidavit alleged.
The resident said, “Dalton entered his apartment through the open door first. Anderson followed Dalton. (The resident) started yelling ‘get out of my house’ at both. Anderson started threatening to kick (the resident’s) ass at that point,” the affidavit alleged.
The resident said, “his filet knife was sitting on the kitchen counter. At some point, Dalton grabbed that knife and began stabbing Anderson multiple times before leaving the scene on foot,” the affidavit alleged.
Friends of the resident, who were present in the apartment, gave similar accounts, the affidavit alleged.
“None of the witnesses I spoke with mentioned Anderson having a weapon at any time during the assault,” the officer alleged in his affidavit.
“I learned Dalton claimed Anderson held a knife to his throat while they were inside (the resident’s) apartment. Dalton told Sgt. Wilson he took the knife away from Anderson before stabbing him in self-defense,” the officer wrote in his affidavit.
If convicted of stabbing Anderson multiple times, Dalton could be given a maximum prison term of 10 years plus a $10,000 fine. If convicted of misdemeanor counts of pushing the woman against a wall and interfering with her emergency 911 phone call, Dalton could be given a jail term of one year and 90 days plus a $3,500 fine, court records show.