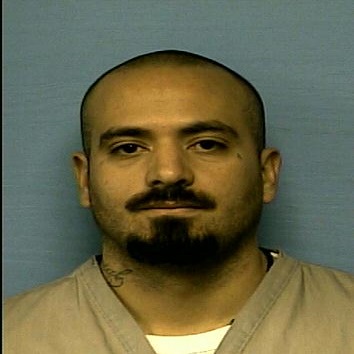 (Stillwater, Okla.) — A Perkins man convicted of accessory after the fact to robbery in Tulsa County has been charged in Payne County with being a felon in possession of a loaded .38 special revolver and committing domestic violence in the presence of the victim’s six-year-old daughter.

Bernardo Jesus Alberto Brunet-Rodriguez, 33, who is being held for immigration authorities, remained in the Payne County Jail this morning pending an April 6 appearance before a judge when he can seek a preliminary hearing, court records show.

Brunet-Rodriguez, who has also been known by the surname of Brunet, was arrested at about 11 p.m. on March 7 by Perkins Police Officer Billy Laster at his residence in the 400 block of W. Stumbo where the victim and her children also lived, an affidavit said.

“The gate was open and a white car was pulling out onto W. Stumbo as I drove towards the entrance to the property,” the Perkins officer wrote in his affidavit.

When the vehicle backed into the property, Brunet-Rodriguez “had his left hand raised and his right hand reaching down into his lap,” according to the Perkins officer, who alleged in his affidavit, “I told him to put his hands up.”

“I heard a female yelling from the house that the male could be armed with a gun. I again ordered him to put his hands up. The female continued to yell that he had a gun,” the Perkins officer alleged in his affidavit.

After Perkins Police Officer Daryn Zanfardino arrived, the pair approached Brunet-Rodriguez, who “had his hands out of the car’s driver window,” according to the affidavit.

Asked what was going on, the defendant “described an argument and he was just trying to leave to go stay at another person’s house,” the affidavit said.

“He denied being involved in a physical confrontation and denied having a gun,” the affidavit said.

After Zanfardino talked to others in the residence, “He told me Brunet had kicked in the door to the house and grabbed the victim…Officer Zanfardino also told me Brunet was to be in possession of a silver revolver with the serial number removed,” Laster alleged in his affidavit.

While Zanfardino stayed with the defendant, Laster went to the house to speak to the frightened victim and a female witness, who called 911, the affidavit said.

“I was shown the door that Brunet kicked in…I also saw a large mirror on the floor of the bedroom. I was told this was knocked over when Brunet forced his way into the house,” where he lived with the woman and her children, Laster wrote in his affidavit.

When the victim was asked about the gun, she “told me it would be in the car or pickup. She had seen it in the house as well at prior times,” Laster wrote in his affidavit.

“Officer Zanfardino informed me that Brunet said the gun was under the seat,” of the Honda where a fully-loaded Taurus .38 special revolver with five rounds of ammunition was found in a black holster under the driver’s seat, Laster alleged in his affidavit.

The gun “had marks consistent with the frame being ground in common areas (where) a serial number would be located,” the affidavit alleged.

“Brunet had stated he was a convicted felon…He also stated he possessed the gun for self-defense at the residence,” the affidavit said.

The victim’s son, who had been upstairs with headphones on, “was unaware anything had occurred until a few moments before my contact with him,” Laster wrote in his affidavit.

The victim “described past incidents of domestic violence where Brunet has choked her. She described one incident where she even blacked out.

“She described Brunet as controlling. He controls her phone and makes her have her location on, where he can see where she is,” the affidavit alleged.

The female witness, who was in the room at the time of the incident, had called 911 when the defendant forced his way into the house, the affidavit alleged.

“When Brunet learned 911 was called, he left the residence which resulted in my contact with him in the driveway,” Laster alleged in his affidavit.

“I contacted DHS and made a referral since children were present during the domestic assault,” Laster alleged in his affidavit.