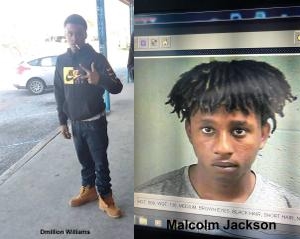 The OSBI is seeking information and the whereabouts of two outstanding suspects in the homicide of 18 year old Arnold Adams III in Chickasha, Oklahoma. In the early morning hours of January 28, 2019, Adams was found deceased near his home in Chickasha.

Arrest warrants for first degree murder were issued for two additional suspects (pictured): 16 year old Dmillion Williams, aka NinePoint, and 18 year old Malcolm Jackson, aka Highlife. They are considered armed and dangerous. If you have any information pertaining to their whereabouts or additional information in the investigation, please call the OSBI at 800-522-8017 or call the local police. Please do not approach them. A $5,000 reward is being offered for information that leads to the arrests of Williams and Jackson.