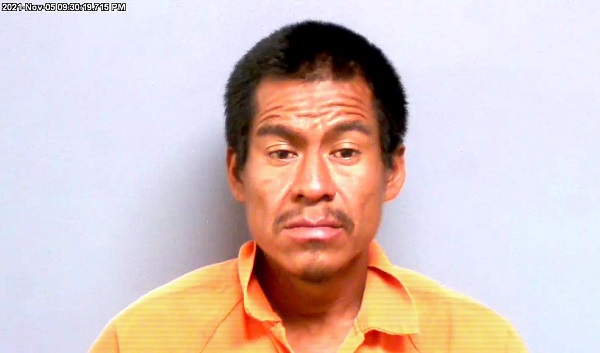 Hugo Adalverto Gomez
Posted on November 18, 2021
By Patti Weaver
(Stillwater, Okla.) — A 33-year-old man has been jailed on $10,000 bail pending a Dec. 6 court appearance on charges of possessing a truck stolen in Tulsa, leaving the scene of a vehicle damage accident in Yale, driving without a license, and shoplifting an ice cream cone from the Maverick Mini-Mart in Yale.
Hugo Adalberto Alfarogomez (listed as Hugh Adalverto Gomez on jail records), whose address is unknown, could be incarcerated for three years plus 60 days and fined as much as $6,300 if convicted of the four-count charge.
Alfarogomez was given a court-appointed attorney at his arraignment by video from the Payne County Jail on Tuesday with an interpreter, court records show.
Alfarogomez was arrested at 8:45 pm on Nov. 5 at Highway 51 and Harmony Road in Yale, according to an affidavit by Yale Police Officer Derrick Russell.
The 1993 Dodge truck that the defendant was driving was confirmed as stolen, by the Oklahoma State University-Tulsa Police Department, the affidavit alleged.
The same truck was identified as the one that hit a vehicle at Chicago Street and H Street and continued traveling, the affidavit alleged.
A man got out of the truck and went into the Maverick convenience store where he stole an ice cream cone valued at $2.89, the affidavit alleged.

“While looking at the vehicle, I noticed some paint transfer on the right front side of the suspect’s vehicle,” the Yale officer alleged in his affidavit.