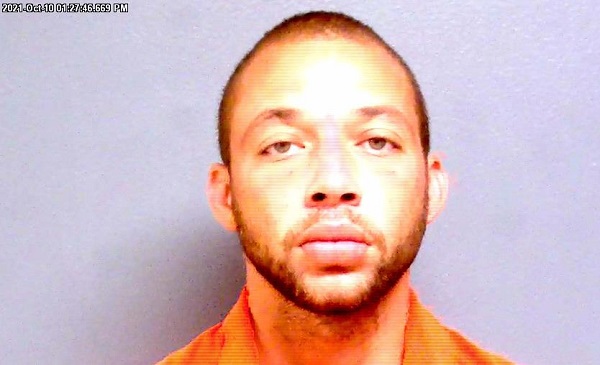 (Stillwater, Okla.) — A 30-year-old homeless man accused of breaking into the apartments of two ex-girlfriends in Stillwater on different occasions and attacking both women has been jailed on $60,000 total bail pending a Nov. 1 court appearance on five felonies and one misdemeanor charge.
If convicted of all six crimes, Christopher Eugene Alexander could be incarcerated for as long as 38 and one-half years, court records show.
Alexander was arrested on all of his charges by Stillwater Police Officer Jonathon Devore at 2:10 am on Oct. 10 — about two hours after he was sent to an apartment on a report of a 911 disconnected call at 12:06 am in which a woman was heard crying and a man screaming, according to his affidavit.
Alexander’s ex-girlfriend told police he had strangled her to the point at which she began to black out and hit her on the right side of her face, her torso and right thigh, the affidavit alleged. After she refused treatment on scene, she was told to seek medical attention if symptoms developed or worsened from strangulation, the affidavit alleged.
“Approximately 30 minutes prior to police being called, Christopher had arrived at the residence and began arguing,” with his ex-girlfriend, who said “while she was being strangled, Christopher commented why would she do this to him,” and called her a name, the affidavit alleged.
“Christopher then left the scene and returned shortly before police were called…Christopher allegedly kicked in the door and approached (his ex-girlfriend) before pulling her by the hair and striking her numerous times,” the affidavit alleged.
“Upon arriving on scene with Officer Behne, I observed the front entry of the residence was slightly ajar. I drew my department-issued service pistol and knocked on the door,” that was answered by a male resident holding a large knife, which he dropped when ordered by Officer Behne, the affidavit said.
When Alexander’s ex-girlfriend was asked if Alexander was in the apartment, she said “somewhere,” the affidavit alleged.
“Before making any further entry into the apartment, Christopher exited from a room at the back of the apartment into my view,” and was instructed to lie face down, which he did, Officer Devore alleged in his affidavit.
In that Oct. 10 incident, Alexander was charged with first-degree burglary, domestic violence by strangulation, and domestic assault and battery as a subsequent offense, court records show.
Six weeks earlier on Aug. 31, Alexander had allegedly kicked open the front door to another ex-girlfriend’s apartment, according to another burglary charge.
That ex-girlfriend said she was in the process of moving out of her apartment and went back to find her door kicked in — with Alexander inside, Stillwater Police Officer Terry Low alleged in another affidavit. Asked why Alexander was there, she said she didn’t know since she had kicked him out over a year ago, but he appeared to be on drugs, the affidavit alleged.
That ex-girlfriend said that when she told Alexander she was calling police, he left her apartment with a baseball bat that he used to break her dresser mirror and computer printer, the affidavit alleged. Five months earlier, on March 15 Alexander had allegedly grabbed her by the throat, broken the windshield of her car and also damaged the car’s front door, court records show.
In 2013 Alexander had been placed on probation for one year for misdemeanor domestic assault and battery in Tulsa County in 2012, court records show.