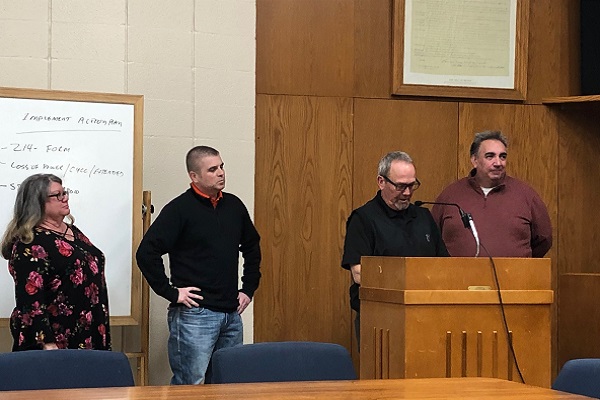 Parrish, a frequent patron at the Cushing Regional Airport, said he wanted to make the donation to the City’s airport to show his support and recognition of the “efforts and dedication to providing one of the finest small airports within the State of Oklahoma due to the hard work and efforts of its manager and assistant manager.”  On behalf of the airport, its manager, Mike Middleton, accepted the $1,000 check from Parrish.

“We also wish to make a $500 contribution to the City Library for its dedication to the operation, collection, and access of educational materials for public use,” Parrish stated in a letter to the City.  “The Cushing Library director and its staff are dedicated servants who have provided, and continue to provide, an excellent friendly and helpful environment to the citizens of Cushing.”  During the presentation, Parrish told how he would drop off his wife, a retired educator/ media specialist, at the library while he conducted business.  “She was always telling me how nice this library is,” he said.  He also shared his own positive experience while visiting the library.  LaDawn Conner, Director of the Cushing Public Library, accepted the $500 on behalf of the Library.

Commissioners approved to amend the budget to receive the donations from Hover Visions, LLC.

Hover Visions LLC, a professional UAV (drone) company, began its commercial aviation business in April 2014 and established its main office in Tulsa.  The owner and chief pilot is Dale Parrish; a FAA licensed manned and unmanned pilot with over 1000 hours of combined experience manned and unmanned aircraft.  He retired in 2012 after serving 30 years in the professional fire service with 26 1/2 of those years serving in Stillwater, Oklahoma.  He is the Technical Advisor to the Tulsa Fire Department within their Fire Robotics UAV program.  Hover Visions specializes in the use of UAV for thermal imaging inspection, GIS mapping, methane detection and monitoring as well as volunteering as an emergency response pilot to emergency response agencies with aerial reconnaissance needs.  Learn more about Hover Visions here: HOVER VISIONS