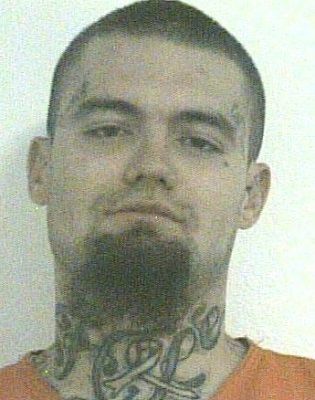 (Stillwater, Okla.)  — A reputed member of the Universal Aryan Brotherhood prison gang jailed on $100,000 bail has been ordered to appear in court on June 27 for a preliminary hearing on a nine-count charge including threatening to shoot Stillwater Police Detective Lt. Cody Manuel with a 9 mm pistol and trafficking methamphetamine.
Due to his criminal record, Robert Drake Mauck, 29, of Stillwater, who got out of prison two years ago, could be given two life sentences plus 25 years if convicted of all counts.
“The Stillwater Police Department Special Projects Unit has been actively investigating sources of methamphetamine supply in the Payne County area over the last eight months that have been coordinated and deconflicted with other state and federal investigations.
“One of the recent focuses of Stillwater PD, Payne County Sheriff’s Office and federal partners including the DEA and FBI include the presence of Universal Aryan Brotherhood (UAB) members and their associates who are operating in and around Payne County.
“This prison gang has been involved in a variety of kidnappings, assaults, homicides, arsons and other criminal activity to include larceny and drug trafficking,” Stillwater Police Officer Brett Moore alleged in an affidavit. FBI agents and Federal Task Force Officers including Moore have determined that Mauck, alias “Duplex,” is a ranking member of the UAB, the affidavit alleged.
“Mauck has a history of narcotics violations, violence, and possession of firearms. In January of 2021 Mauck shot at his brother Austen after a physical altercation between the two. Due to Mauck’s gang affiliation and violent past, the Stillwater Multi-jurisdictional Special Operation Team was requested to execute the search warrant authorized by the Stillwater Chief of Police,” at Mauck’s house in the 400 block of S. Burdick, the affidavit alleged.
While the team was gathering to brief for the plan of execution on the warrant on March 23, a sniper/spotter team, which had already been deployed to the residence, told Officer Moore that Mauck left the house carrying a backpack and got into the driver’s seat of a Tahoe parked in front of his house, the affidavit alleged.
Aware that Mauck had a suspended driver’s license, Stillwater Police Detective Adam Elliott pulled behind Mauck and attempted to conduct a traffic stop, but Mauck immediately accelerated, ran a stop sign and turned back into his residence, the affidavit alleged.
“Mauck exited the vehicle and began running toward the residence; however, Lt. Manuel detoured him from the door at which time he ran to the south side of the residence and west toward the backyard. Lt. Manuel continued the chase with his gun drawn. Lt. Manuel advised he observed Mauck reaching into his waistline. Mauck produced a Taurus 9 mm semi-automatic pistol.
“Lt. Manuel fired one round missing Mauck and striking the residence behind him. Mauck then threw the pistol into the backyard of the residence and began yelling for the two females inside to retrieve his gun from the yard. Mauck then refused to comply and had to be forcibly taken into custody by Lt. Manuel, Sgt. Savory and Detective Elliott. The gun thrown by Mauck was immediately recovered and secured by Detective Elliott,” the affidavit alleged.
When Mauck’s residence and vehicle were searched, 169 grams of methamphetamine, which is about eight times the amount required for a drug trafficking charge, was seized, the affidavit alleged. Alprazolam pills or Xanax and marijuana were also found in Mauck’s vehicle in a backpack, which Mauck was observed carrying, the affidavit alleged.
“A box of federal 9 mm ammunition was also located in the glovebox of the vehicle,” and $245 believed to be proceeds from selling narcotics was found in Mauck’s wallet, the affidavit alleged.
According to the state Department of Corrections, Mauck had been released from prison in May of 2020 after serving about two years of a six-year sentence for possessing a drug with intent to distribute in 2017 in Garfield County; Mauck also served less than two years of two concurrent five-year sentences for unauthorized use of a vehicle in 2016 and drug possession in 2015, both in Payne County, DOC records show.