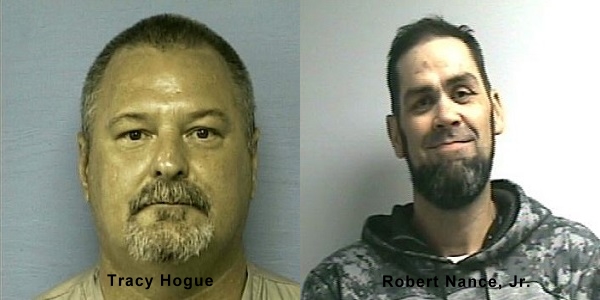 (Perkins, Okla.) — Two ex-convicts arrested by Perkins Police Officer Billy Laster in a pickup truck pulling a stolen city-owned trailer have been jailed on $10,000 bail each pending their court appearances on June 1.

Tracy Randell Hogue, 52, of Midwest City, who was released from prison two years ago, has been charged with conspiracy to commit a felony and grand larceny, court records show.

Robert Duane Nance Jr., 43, of Stillwater, who got out of prison three years ago, has been charged with conspiracy to commit a felony along with possession of methamphetamine and drug paraphernalia, court records show.

Both men were arrested at 12:51 a.m. on May 9 at Highway 177 and E. 140th after the officer was notified “a city of Perkins owned utility trailer equipped with a tracking device had been removed from its assigned location at the northeast corner of E. Knipe and S. Main Street,” according to Laster’s affidavit.

Since the trailer was moving south of city limits on Highway 177, “I believed the trailer was stolen as no city crews were out working at this time in that area,” Laster wrote in his affidavit.

After the Perkins officer was given permission by the Payne County Sheriff’s Office to conduct an investigation outside of city limits, Laster located the stolen city trailer hooked to a small pickup parked on the south side of the road just east of the intersection of Highway 177, his affidavit said.

“Hogue walked towards my patrol car from the trailer and I ordered him to put his hands on the hood of my car,” according to the Perkins officer, who ordered Nance out of the passenger seat of the truck pulling the stolen city-owned trailer, Laster wrote in his affidavit.

Hogue “told me he bought the trailer from a guy named Paul at the casino. I told him I knew he was lying and I told him the trailer was owned by the city and had a GPS tracking device. He then admitted he stole the trailer from near the car wash. Hogue later told me he was driving the vehicle and Nance had got out and hooked up to the trailer,” Laster alleged in his affidavit.

Nance “did not wish to answer any questions,” the affidavit said.

Perkins Police Officer Jason Thompson arrived on scene at 1:03 a.m. and “located at the passenger seat area (where Nance was previously seated) a spoon with residue, a cut straw and a white pill. I located between the center console and passenger seat a glass smoking device with burnt residue. I also located a small baggy of crystal substance under the passenger seat at the floorboard,” Laster alleged in his affidavit.

Before Hogue was transported to the Payne County Jail, he “told me the methamphetamine belonged to Nance,” Laster alleged in his affidavit.

“Prior to the book-in process, the jail staff assessed both individuals due to the current COVID-19 pandemic,” the affidavit said.

According to the state Department of Corrections, both defendants had previously served prison sentences for drug convictions.