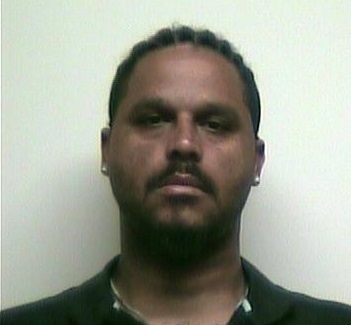 (Stillwater, Okla.) — An ex-convict from Drumright, who listed a Cushing address when he was released from the Payne County Jail on a personal recognizance bond on Dec. 3, is being sought by authorities for failing to appear in court before a Payne County judge on Jan. 7 on felony methamphetamine and copper-related charges.

Nathaniel Marteze McCormick, 34, has also been sought in Creek County since Dec. 23 when an arrest warrant was issued for him on a misdemeanor charge accusing him of entering an ME3 Oilfield Service shop building in Drumright with intent to commit a crime on Sept. 1, 2019, court records show.

Four months ago, McCormick had pleaded guilty in Creek County to misdemeanor charges of breaking and entering a room at the Drumright Inn, along with possessing methamphetamine and a glass smoking pipe on Labor Day of 2019.

McCormick was scheduled to be released from the Creek County Jail on Oct. 1, 2019, since he was given credit for the time he had served. McCormick had been sentenced in his Creek County case on Sept. 20, 2019, to 30 days in custody with an order to pay $185 in assessments along with court costs.

McCormick had already been charged in Payne County in August of 2019 with entering onto property of Starks Electric Company in Cushing on July 17, 2019, with intent to steal copper wire and copper cable, court records show.

In that case, Cushing Police Officer Christopher Haywood wrote in an affidavit that at 3:44 a.m. on July 17, 2019, he saw a suspicious vehicle parked on the north side of the Lazy-L motel “as though to avoid being seen.”

The officer alleged that he saw someone, who appeared to have clothing over his head, “bent over at the waist and attempting to pull black cables from underneath the fence,” according to his affidavit.

When the officer asked what he was doing, “McCormick advised he was looking at the cables,” the affidavit alleged.

“I asked McCormick what the copper wire in-between his vehicle and fence were for. McCormick advised he did not know and that they wee there and appeared abandoned.

“I asked McCormick why he was trying to pull the wires from underneath the fence. McCormick advised he only wanted to find out what they were,” the Cushing officer alleged in his affidavit.

Since the owner of Starks Electric could not be contacted at that hour by a dispatcher regarding the copper cables, the Cushing officer collected McCormick’s information and released him, the affidavit said.

Later that morning, business owner Mike Starks met the officer at the location and “advised the copper wires and cables were out of place,” the affidavit alleged.

“Starks further advised it was his belief that someone had been inside his fenced-in lot,” and said he would review his camera footage, the affidavit said.

“Starks later submitted a statement saying ‘On July 17, 2019, Officer Chris Haywood of the Cushing Police Department caught Nathaniel McCormick stealing wire and other materials after jumping over the fence into our locked company yard. He (the suspect) also spray-painted one of our security cameras and a photo eye.

“However, we have more than two hours of security footage from other cameras showing him (the suspect) on our property stealing material,” the owner of Starks Electric alleged his statement to police, according to the affidavit.

“He did not have our permission to take anything from our company or to be on our property. After reviewing our footage, we saw him throw material over the fence and put it in his trunk. He was also pulling wire under the fence when Officer Haywood appeared. He did not take the material out of his truck and leave it on our property before he drove away,” the business owner alleged in his statement to police, the affidavit said.

According to court records and the Oklahoma Department of Corrections, McCormick had previously been convicted of:

* methamphetamine possession in Cushing in 2017, for which he was given a two-year prison term from Payne County of which he served about nine months, followed by four years of probation;

* concealing stolen property, drug possession and maintaining a place for keeping or selling drugs in 2014 in Creek County, for which he was placed on three years’ probation, of which 18 months were revoked in 2017 that he discharged in about 10 months;

* domestic assault and battery in 2011 in Creek County, for which he was placed on five years’ probation, but two years were revoked in 2015 that he discharged in eight months;

* possession of a stolen vehicle in 2005 in Creek County, for which he was given 18 months’ incarceration that he discharged in 11 months in 2006;

* false personation in 2005 in Tulsa County, for which he was given two years’ incarceration with the Regimented Inmate Discipline (RID) prison boot camp program that was modified by a judge in 2006 to one year and seven months of probation.