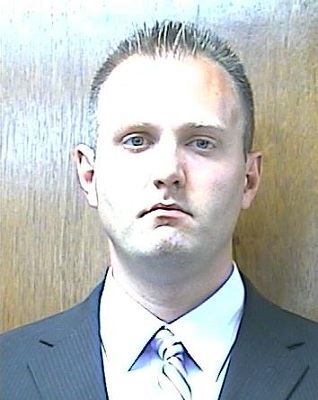 Lucas D. Hicks
Posted on October 8, 2021
By Patti Weaver
(Stillwater, Okla.)  — An ex-convict accused of breaking into a Coyle man’s shop, stealing his Dodge truck, trying to run over him with it, and hitting a Payne County sheriff’s deputy in the face has been ordered to appear in court Nov. 1 on a four-count felony charge.
Due to his criminal record, Lucas Dewey Hicks, 46, of Coyle, who remains on probation for possessing methamphetamine in Perkins on two occasions in 2017, could be given as much as four life prison terms if convicted of all counts.
Hicks was arrested at 5:58 pm on Aug. 30, 25 minutes after Payne County Sheriff’s Deputy James Vogt was sent to the victim’s property on N. Meridian Road in rural Coyle, court records show.
The victim “stated the suspect was in his black Dodge truck coming towards us. I pulled my patrol vehicle with emergency lights flashing into the driveway to block the suspect from leaving the property. I exited the vehicle when the suspect was driving closer to my patrol vehicle.
“The suspect stopped, but wasn’t following directions as I told him several times at gunpoint to exit the vehicle. After several attempts, the suspect finally exits and goes to the ground. I covered the suspect as Deputy Courtright tried to handcuff the suspect,” who began to tense up and fight with Deputy Courtright, Deputy Vogt alleged in his affidavit.
“I secured my weapon and took a hold of the suspect’s left arm,” who kept struggling and hit him in the face with an open hand, Deputy Vogt alleged in his affidavit.
“After a short while, I told him to comply or he will be tased. The suspect finally complied and we were able to place him in handcuffs,” to be taken by Deputy Courtright to jail, Deputy Vogt alleged in his affidavit.
“I made contact with the victim, who stated while coming home he heard his Dodge truck start up and drive away. The victim tried to stop the arrestee, but the arrestee tried to run him over with the truck. The victim was able to jump out of the way,” Deputy Vogt alleged in his affidavit.
“The victim told me he did notice his shop building was open and some beer and cheese were missing from the fridge. I observed what appeared to be a dirty shoulder print on the door; that’s how the arrestee forced his way into the shop, by forcing open the door with his shoulder,” Deputy Vogt alleged in his affidavit.
“Neighbors did tell the victim that his vehicles were moving around the property since 8:30 in the morning. The victim stated he wasn’t home at that time, and neither was his wife,” the affidavit said.
Following his arrest, Hicks was held in the Payne County Jail on $15,000 bail until a judge agreed to release him on a personal recognizance bond on Sept. 27 to be immediately transported to a Veterans Administration program in Oklahoma City, court records show.
In addition to his two methamphetamine possession convictions in Payne County, Hicks was found guilty of methamphetamine possession in 2000 in Oklahoma County — where he had multiple forgery convictions, as well as one for identity theft, two for presenting a false ID card, and two for stolen property possession, court records show. Hicks served about two and one-half years of nine concurrent seven-year prison terms before he was released in 2004, state Department of Corrections records show.