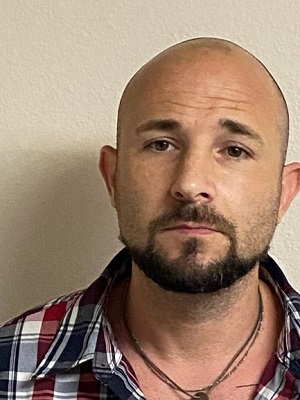 (Cushing, Okla.) — An ex-convict with an extensive criminal record in Lincoln County where he remains jailed has been charged in Payne County with stealing a Cushing man’s company work truck from his driveway and another Cushing man’s wallet from a different vehicle.
Due to his prior felony convictions, Roy Henry Palagonia Jr., 38, who previously lived in Cushing, could be given a life prison term if convicted of his Payne County vehicle theft charge, on which he has not yet appeared in court.
Palagonia, who had been released from prison last year, was arrested by the Lincoln County Sheriff’s Department on May 7 after being found in a pasture lying down by the property owner’s pond, Cushing Police Officer Sara Reynolds alleged in an affidavit.
Three days earlier, the Cushing officer had been sent to the 1700 block of E. Timberridge on a report by a Cushing man that his company work truck had been stolen out of his driveway at about 1:45 am on May 4, her affidavit said.
“In the video, I observed what appeared to be a white male wearing possibly a black hoodie walk across (the man’s) yard. The unknown individual walked directly up to the company truck, opened the driver side door, and got in,” at about 1:32 am, the Cushing officer wrote in her affidavit.
At 1:45 am, “the pickup truck starts, backs out of the driveway and proceeds to drive away,” the affidavit said.
Two days later, the Cushing officer was notified that the truck had been located by Oklahoma City police at 8:24 am in the 8000 block of Coltrane and Britton, the affidavit said.
Later that day, the owner of the stolen truck brought it to the Cushing Police Department to be searched, the affidavit said.
“I discovered a black wallet that had been reported stolen on May 4,” and four pieces of mail bearing the defendant’s name, the Cushing officer alleged in her affidavit.
During an interview by a Lincoln County sheriff’s deputy, Palagonia initially denied being involved with the reported stolen truck, but later admitted he stole it in Cushing, the affidavit alleged.
When the Lincoln County deputy asked Palagonia why he left his female companion in Oklahoma City with the stolen truck, “Roy said he did not leave her. They were both doing heroin and arguing. He parked the truck and went for a walk to do car hopping (auto burglaries),” the affidavit alleged.
While searching the stolen truck, the Cushing officer found a Cushing man’s stolen wallet, but the contents including a driver’s license a bank debit card and two credit cards, were gone, the affidavit alleged. “I also discovered mail belonging to a Roy Palagonia,” she alleged in her affidavit.
In Palagonia’s current Lincoln County case for which he remains jailed on $21,000 bail pending an Aug. 5 preliminary hearing, he is charged with eluding a Stroud police officer in a different stolen truck while running a vehicle off the road and a stop sign on May 6, as well as resisting a Lincoln County deputy on May 7.
At the time of his latest charges, Palagonia was on nine years’ probation after completing the state prison’s Drug Offender Work Camp for pointing a gun at a Meeker man, being a felon in possession of a firearm and also hitting the man, all on Dec. 26, 2019, in Lincoln County, court records show.
Palagonia was given the same concurrent sentence for being a felon in possession of a gun while escaping from arrest in Lincoln County on Dec. 14, 2019, along with breaking into a garage in rural Prague, court records show.
According to the Oklahoma Department of Corrections, Palagonia had also previously been convicted of:
* larceny in Ohio for which he was placed on three years of interstate probation in 2009;
* drug possession in Lincoln County for which he was given a two-year prison term in 2011, but only served about four months;
* marijuana possession in Oklahoma County for which he was given a two-year prison term in 2016, but only served about six months;
* two counts of second-degree burglary and two counts of possessing stolen property in 2017 in Lincoln County for which he was given four concurrent six-year prison terms, but only served about one year and eight months.