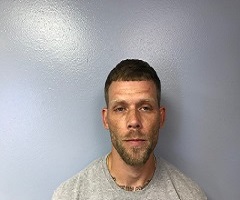 (Stillwater, Okla.) — An ex-convict — on 22 years’ total probation for twice possessing methamphetamine in Creek County in 2016 — has been charged in Payne County with trafficking methamphetamine in the Cushing area, as a result of a laboratory analysis recently received by the Sheriff’s Office, court records show.

A warrant from Payne County has been issued for the arrest of Richard Tyler Gaither, 34, reportedly of Cushing, who had already been ordered to appear in Pawnee County District Court this Friday for allegedly violating his probation in a 2016 case of being a convicted felon with a firearm in Jennings, court records show.

In his Payne County case filed last week, Gaither was accused of possessing more than twice the amount of methamphetamine required for a trafficking charge, which carries as much as a life prison term on conviction. Gaither was also charged with driving on a suspended license after a traffic stop on April 14 at 9th and Highway 99, court records show.

Payne County Sheriff’s Deputy Christopher McKosato was running radar in the area of Oak Grove Road and 9th Street at 5:13 a.m. on April 14 when he saw a white Lincoln with a right defective tail light cover signal to turn left, but make a right turn, according to his affidavit.

When the car stopped, “Gaither stated he has been having issues with the electrical components of the car and sometimes the blinkers stick and were not acting right,” the affidavit said. After Gaither was given a citation for driving on a suspended license, “I advised him he was free to leave and could call someone to pick him and the car up,” the deputy wrote in his affidavit.

“While waiting for someone to pick him up, I engaged Gaither in conversation again and asked if he ever had been in trouble before and he said he had for possession of a controlled substance and served time in prison for it,” the deputy alleged in his affidavit.

“I asked Gaither if he had anything in the car that would be considered illegal and he stated no and said, ‘You can go ahead and look,"” the deputy alleged in his affidavit.

“While speaking with Gaither, Deputy Korey Carruba advised me he located a green bandana under the driver’s seat with a clear plastic bag filled with a white crystal-like substance in it,” suspected of being a narcotic, the deputy alleged in his affidavit.

“I explained to Gaither the findings and he immediately stated he took the bag from a 13-year-old kid in the neighborhood and forgot to throw it away. Gaither said the substance was not ‘drugs,"” the deputy alleged in his affidavit.

“I observed the clear plastic bag to be tied at the top and the substance to be a white crystal form. I believed this substance to be methamphetamine through my law enforcement experience,” the deputy wrote in his affidavit.

“The total of 44.83 grams is a very substantial amount known for the sale and distribution of methamphetamine,” the affidavit alleged.

According to the Oklahoma Department of Corrections, Gaither had previously been convicted of:

* marijuana possession in Sapulpa in Creek County in 2006, for which he was initially ordered into a 13-month drug treatment program in Georgia that dismissed him for failure to complete the program, after which he was ordered into the state prison’s Regimented Inmate Treatment program (RID) followed by a five-year deferred sentence that was changed four years later to a two-year suspended sentence with Drug Court from which he was terminated about six months later, after which he was sent to prison in 2013 for one year for violating probation, to be served consecutively to the following sentence;

* drug possession in Kellyville in Creek County in 2011 for which in 2013 he was given a five-year prison term of which he served less than half;

* methamphetamine possession with intent to distribute in Bristow in Creek County in 2016, for which he was placed on probation for 15 years;

* methamphetamine possession in Bristow in Creek County on another occasion in 2016, for which he was placed on probation for seven years consecutive to the15 years above;

* methamphetamine possession in Bristow in Creek County on another occasion in 2016, for which he was initially placed on probation that was revoked in 2017 to a six-year prison term of which he served two years prior to his release in January of this year;

* being a convicted felon in possession of a firearm in Jennings in Pawnee County in 2016, for which he was given in 2017 a concurrent five-year prison term followed by three years of probation, which the prosecution is attempting to revoke in the case on which he is scheduled to appear in court this Friday.