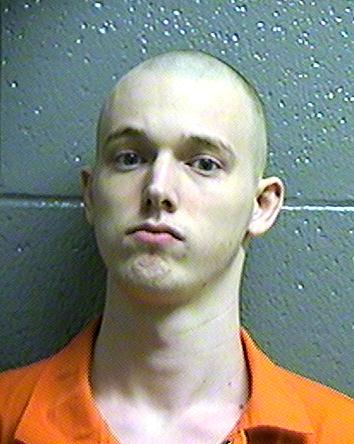 (Stillwater, Okla.) — A Drumright man with a history of methamphetamine-related arrests was given a 19-year prison term today followed by six years of probation for sexually abusing a young female relative in rural Payne County.
Eric Thomas Stump, 30, who had waived his right to a jury trial, pleaded guilty this morning to abusing the girl between the ages of 10 and 11 between April of 2020 and January of 2021, court records show.
On his release from prison, Stump must register as a sex offender and provide a DNA sample, Payne County District Judge Phillip Corley ordered today.
In a petition for an emergency protective order granted in August of 2021, the girl’s mother wrote that Stump “would make (the girl) do sexual acts to get things and would tell her that’s what she had to do if she wanted to be famous, that all the famous girls went through that.”
The girl’s mother wrote in her EPO petition, “He has told me he is gonna burn my house down with me in it. He has come to my house yelling outside in the middle of the night beating on the side of my house and windows, scaring me and my kids.”
An investigation of Stump was initiated in the summer of 2021 by a police officer who realized the jurisdiction was not in city limits, Payne County Sheriff’s Investigator Rockford Brown wrote in an affidavit. The sheriff’s investigator subsequently observed a forensic interview of the child, the affidavit said.
“Following nearly all of the incidents, the child disclosed that Stump would cry and apologize,” the affidavit said.
“Stump would coerce the child into the sexual acts by promising to help them become famous because anyone who was famous had to participate in provocative acts,” the affidavit said.
In an earlier separate case in Payne County, Stump pleaded guilty to attempting to elude a sheriff’s deputy from 9th and Norfolk Road to the city of Drumright in a stolen truck while possessing methamphetamine on June 24, 2021. Three months later, Stump was given a 180-day jail term, with credit for time served, followed by four and one-half years of probation for attempting to elude, with a concurrent one and one-half years of probation for possessing the vehicle stolen in Creek County.
Payne County Sheriff’s Investigator Brandon Myers wrote in an affidavit that Stump eluded Deputy James Vogt “at speeds of 120 mph, passing vehicles in no-passing lanes and blowing through four four-way stop signs without regard for safety,” before losing control of the truck and rolling into a telephone pole in Drumright.
The deputy “had the suspect at gunpoint and on the ground when the suspect hopped up and ran south across the street jumping through a barbed wire fence fleeing southwest,” for about 200 yards into a field before finally obeying commands, the affidavit said.
The truck owner, who had a construction business, said that the total value of his tools and property was $5,914, the affidavit said. Stump had a small pouch with methamphetamine and was transported to Stillwater Medical Center where he was cleared to be jailed, the affidavit said.
The next day during an interview at the Payne County Sheriff’s Office, Stump “said that he tried to run, but the deputy’s car was too fast. He said that he was going at least 120 mph and had run several stop signs. He said that there was traffic present and he had passed several cars. He said that he jumped through the fence and ran until he couldn’t breathe, and he knew the deputy was chasing him,” the affidavit said.
Asked about the truck, Stump “told me he found it in the woods by Mannford with the keys in it. He said the back of the truck was ‘loaded down,"” and he sold some tools at a pawn shop, the investigator wrote in his affidavit.
Stump “also told me that he did not cut off the catalytic converters on the truck and they were already in the bed of the truck. He said he sold the catalytic converters,” to a salvage business, the investigator wrote in his affidavit.
According to court records, when Stump was 19, he was arrested with 37-year-old Rhonda Davis of Cushing by Payne County Sheriff’s Deputy Dan Nack for mixing substances to manufacture methamphetamine and creating an active lab containing more than 20 grams of methamphetamine at the Dunkin Cemetery on April 28, 2012.
Stump pleaded guilty and was sent to the Regimented Inmate Discipline (RID) prison boot camp program for about nine months before being placed on six years of probation under a deferred sentence with an order to attend AA/NA meetings weekly for six months, court records show. Davis was given a 10-year prison term.
Stump told the sheriff’s deputy “he met up with Rhonda earlier this date when she stated that she would take him to get him high. She said she knew a place to do the cook at. He stated after arriving at the cemetery, she mixed up the bottle,” activated it and told him to watch over it, the affidavit said.
“Eric states that they were standing near the hood of his car when he saw me pull in. They then took off running to the east; then he and a juvenile cut south. After jumping the first fence, he states he no longer saw Rhonda running,” who was subsequently spotted lying in the grass, the affidavit said.
“Processing the lab with Deputy Russell, the clear liquid in the smart water bottle field-tested positive for methamphetamine and exceeded 20 grams,” the affidavit said. A 15-year-old boy was transported to the Sheriff’s Office where he was later released to a relative, the affidavit said.