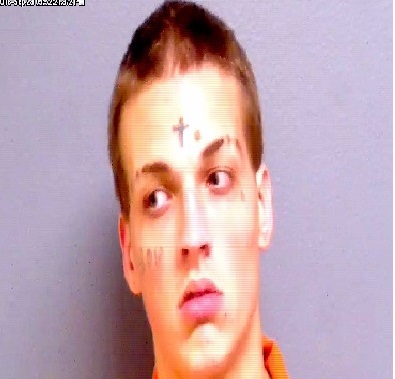 (Stillwater, Okla.) — On his trial date in a Cushing home invasion, a Drumright man accepted a plea agreement with the prosecution last week for a 15-year prison term for stealing a woman’s car with his co-defendant, as well as concurrent 10-year prison sentences on reduced charges of conspiracy to commit first-degree burglary and conspiracy to commit first-degree robbery.

Zachary Alexander Love, 23, who has an eighth grade education, pleaded guilty on Sept. 25 to those charges before Payne County Associate District Judge Stephen Kistler, who ordered him to pay $5,920 restitution with his co-defendant, former Cushing resident Jacob Clifford Cushenbery, 26, of Agra, who was sentenced to prison last year.

According to an affidavit by Payne County Sheriff’s Investigator Brandon Myers, Cushing police were sent at 2:26 a.m. on May 27, 2018, to the Cushing hospital’s emergency room on a reported robbery.

The victim “reported that she was asleep on her couch when she heard a loud noise coming from her bedroom. She got up to investigate and found two masked men in her house.

“The men took her to the kitchen, tied her up, held her at gunpoint, ransacked her house, stole her medicine from her purse, her cell phone and ultimately her car. During the incident, one of the subjects drank from a tea jug that was in the residence. She told the officers that one man was tall and the other was short.

“Officers found a screen off of a window in the southwest bedroom and a fresh smeared fingerprint. A few days after the robbery, (the victim) found a brown-handled revolver among the ransacked items that did not belong to her,” the affidavit said.

“The same day at about 8:30 a.m. Payne County deputies and Yale fire were dispatched one-eighth of a mile east of Eagle Road on Phillips Road for a car fire. The car was crashed into the ditch and fence and was on fire,” the affidavit said. The car belonged to the Cushing woman, the affidavit said.

While the car fire was being put out, two men, later identified as Love and Cushenbery, were at a residence about one-fourth of a mile south where Cushenbery attempted to take a pickup, the affidavit said.

“Jacob (Cushenbery) was able to get a ride to Oilton where he stole another vehicle and was arrested later that day at Log Cabin and Norfolk when the stolen vehicle he was driving ran out of gas,” the affidavit said.

The Cushing woman said “about five to six months prior to the robbery, she had to kick Zachary (Love) out of her house,” but she had never heard of Cushenbery, the affidavit said.

When the sheriff’s investigator interviewed Love on July 6, 2018, “At first he denied any involvement. He then tells me that he knew that Jacob (Cushenbery) was going to rob her, but he did not take any part in it,” the affidavit said.

“He continued to deny any involvement in the robbery, but admitted he was picked up the next day by Jacob (Cushenbery) and was getting a ride to Tulsa. He said that Jacob (Cushenbery) went crazy and just crashed the car and set it on fire. Zach (Love) denies knowing it was stolen until Jacob (Cushenbery) told him it was, after it was on fire,” the affidavit said.

Four months later, Cushenbery was given a 12-year prison term for breaking into the Cushing woman’s home on May 27, 2018, robbing her at gunpoint of medication as well as her cell phone, and sfealing her 2014 Honda Insight.

Cushenbery, who was ordered to pay $5,920 restitution with his co-defendant, had pleaded guilty to the Cushing home invasion, as well as possessing an Oilton woman’s stolen 2011 Chevrolet Cruze and attempting to escape from Payne County Sheriff’s Lt. Nick Myers on May 27, 2018, for which he was given a concurrent 12-year prison term.

According to Payne County and state Department of Corrections records, Cushenbery had been released from prison in June 2015 after serving one year of three concurrent three-year prison terms for crimes in Cushing:

* unauthorized use of a vehicle in 2011 for which he was originally given a five-year suspended sentence in 2012 with an order to enroll in and successfully complete the Payne County Drug Court program from which he was terminated in 2013, followed by his probation revocation in 2014;

* second-degree burglary in 2012 for which he was originally given a seven-year suspended sentence in 2012, with the condition of successful completion of Drug Court after which he was terminated and his probation revoked in 2014;