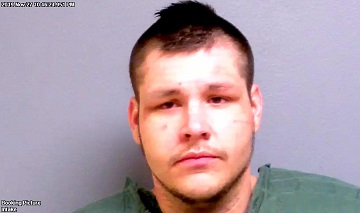 (Stillwater, Okla.) — During an interview after being arrested, a Drumright man charged with two counts of first-degree murder in a double fatality crash at 2:09 p.m. on the day before Thanksgiving at the intersection of Norfolk Road and Highway 51, west of Yale, “admitted to recent drug use prior to the collision occurring,” Oklahoma Highway Patrol Traffic Homicide Investigator Shayne Ballard alleged in an affidavit filed in court records Tuesday.

Tommy Leroy McClendon Jr., 24, “admitted to being the driver of the 2010 Toyota Tundra involved in the collision,” that took the lives of two family members and critically injured two others, the OHP investigator alleged in his affidavit.

McClendon Jr., who was driving a stolen vehicle on a revoked driver’s license, admitted that he saw Yale Police Chief Phillip Kelly “attempt to initiate a traffic stop by activating the emergency lights and McClendon stated he accelerated as fast as he could go in attempt to flee,” the OHP investigator alleged in his affidavit.

“The Toyota Tundra driven by McClendon accelerated at an extremely high rate of speed northbound on Norfolk Road and struck a 2019 Honda Passport that was traveling westbound on State Highway 51,” the affidavit alleged.

The driver of the Honda, Michelle Renea Clary, 55, of Stillwater, was transported by Life Net to St. Francis Hospital in Tulsa in critical condition with multiple injuries, the investigator wrote in a report.

Two passengers in the Honda, Floyd Margason Jr., 77, of Stillwater, who was ejected, and Shelayna Renea Knott, 28, of Orlando, both died a the scene of massive injuries, the report said. A 4-year-old passenger from Orlando in the Honda was transported by Life Net to the Cushing hospital and released after treatment, the report said.

McClendon was not injured; his passenger, Elexis Taber, 18, of Drumright, who was ejected, was transported by Air Evac to St. Francis Hospital in Tulsa in critical condition with multiple injuries, the report said.

“Several law enforcement agencies were engaged in a manhunt for several hours,” before McClendon Jr. was found near the scene of the collision in a heavily wooded area, the affidavit alleged.

“McClendon Jr. made the conscious decision to drive a stolen vehicle at a high rate of speed and cause a double fatality collision,” the affidavit alleged.

At his arraignment Tuesday, McClendon Jr. was given a court-appointed attorney, Royce Hobbs of Stillwater, to represent him on two counts of first-degree murder punishable on conviction by life in prison or death. McClendon Jr. was ordered held in the Payne County Jail without bail and scheduled to appear in court on Jan. 6, 2020, when he can seek a preliminary hearing.

According to Payne County court records, only three months earlier McClendon Jr. had been found in violation of the probation he received last year on a felony charge of attempting to elude Cushing police while driving a 2006 Dodge with an expired license tag on a suspended license on April Fool’s Day of 2018, for which he was given a 180-day jail term with credit for the time he had already served.

McClendon Jr. was also on felony probation for possessing a stolen 2012 Dodge truck in Cushing on Jan. 4, 2018, court records show.