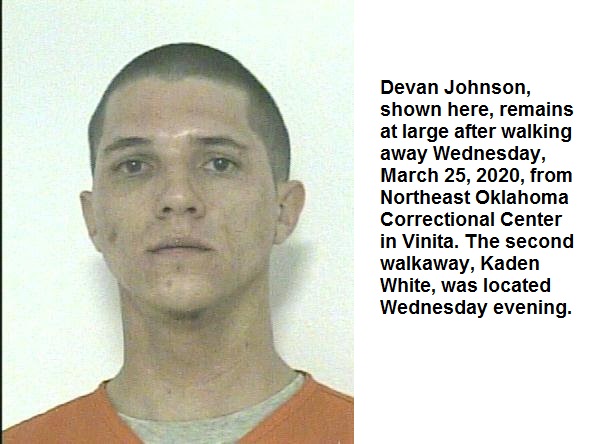 Wednesday evening, an off-duty correctional officer spotted Kaden White, 25, walking along railroad tracks about 7 miles from NOCC, a minimum-security prison for men. The CO called the facility; and ODOC agents and facility COs captured him.

As a COVID-19 precautionary measure, White is in 14-day quarantine at Lexington Assessment & Reception Center in Lexington.

Johnson is serving five years for second-degree burglary out of Oklahoma County and aggravated assault and battery out of Pottawatomie County, as well as other crimes.
NOCC security staff discovered the two missing around 2:45 p.m. Wednesday.

Anyone with information on Johnson’s location should call 911 or ODOC’s escapee hotline at (866) 363-1119. Citizens can also email information to email warrants@doc.ok.gov. All calls and emails are confidential.