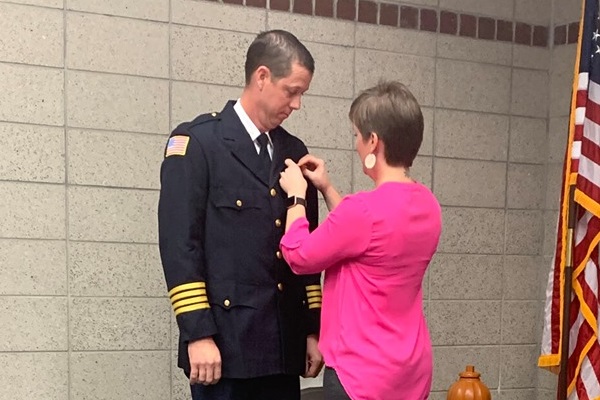 Fire Chief Derek Griffith being pinned by his wife Jamie at a ceremony held at Cushing Safety Center. (photo provided)
Posted on November 4, 2019

“Today Derek Griffith was named the Fire Chief for the City of Cushing following the retirement of longtime Chief Chris Pixler. Chief Griffith began in his new role today. Chief Griffith has served the fire department for 19 years and has been serving as the Deputy Fire Chief since 2012.

‘Chief Griffith is another valuable member of our leadership team, and is a proven leader in the fire department, beginning as a rookie fire fighter and progressing through the ranks to Captain before being named Deputy Fire Chief by Chief Pixler,’ said City Manager Terry Brannon. ‘Chief Griffith is a man of character, is highly trusted, and has a distinguished record serving the people of Cushing,’ Brannon said. ‘I am fully confident that Chief Griffith will lead the fire department in this new season with excellence, serving the men and women in the fire service and the people of Cushing exceptionally well,’ he said.

Chief Griffith’s service in the Cushing Fire Department began as a Firefighter in 2000. Following promotions to Lieutenant and Captain, he became Deputy Chief in 2012, following recently retired Chief Pixler who was promoted to Fire Chief.

As Deputy Chief, he helped managed daily operations for the department, and oversaw the functions of fire marshal and EMS director. He also contributed to the budget, strategic planning, and promotional processes. In his new capacity as Fire Chief, he will direct a staff of 23 in meeting departmental goals and objectives, and manage a budget exceeding $2 million dollars.

‘I am honored to lead this exceptional department and appreciate the opportunity to collaborate with City management to help the department continue to be one of the very best in the state,’ said Chief Griffith. ‘Our department will continue to partner with the community to provide an unparalleled level of service, something the people of Cushing have come to expect and something we take pride in providing.’

In addition to serving in the fire department, Chief Griffith has also been active in Habitat for Humanity, Cushing Pride, Tomorrow’s Leaders, the Cushing Economic Development Foundation, and the Cushing Lion’s Club.