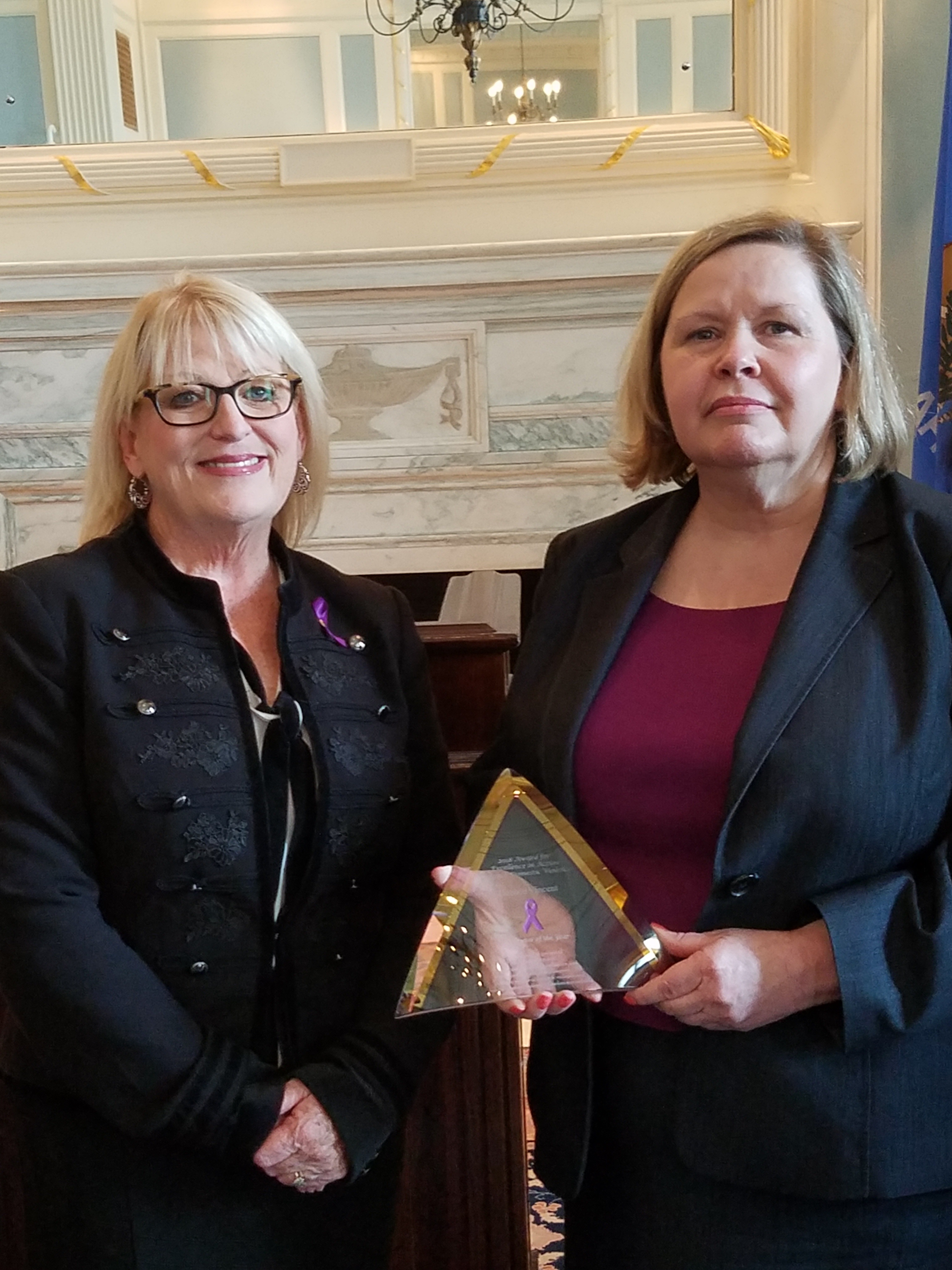 (Stillwater) — District Attorney, Laura Austin Thomas, announced today that Debbie Vincent, Assistant District Attorney, received the 2018 Award for Excellence in Action Against Domestic Violence as a prosecutor demonstrating outstanding efforts that go above and beyond what is expected to serve victims and hold domestic violence offenders accountable.  Representing their 10th Annual Awards, this recognition is given in a collaborative effort by the Oklahoma District Attorneys Council, the Native Alliance Against Violence, the Oklahoma Coalition Against Domestic Violence and Sexual Assault, the Office of the Attorney General and the Oklahoma Department of Human Services.

She was presented with this award Thursday, October 4th at the State Capitol. Austin Thomas said Debbie Vincent is an extraordinary prosecutor, and one I am very proud to have representing our office in cases involving domestic abuse victims, children, and sexual assault victims.  The crimes behind the faces of these victims are complex, serious, frustrating, emotionally charged and demanding of much attention in order to achieve a successful prosecution and outcome.

Austin Thomas said successful prosecution of domestic violence cases is a collaborative and evolving effort both before and after charges are presented to our office.  Law enforcement, Wings of Hope and the Saville Center all play integral and important roles in working with domestic violence victims.  Debbie works closely with our victim witness coordinator and victim advocate to keep victims informed of the progress of their cases and to the services available to them. From the time the officer’s report is presented, Debbie reaches out to the victims.  She arranges meetings with them and explains the entire court process to them and what is to be expected.  She listens, and asks them what their perceptions are, their feelings, what they hope can be accomplished and what they are most afraid of which sometimes triggers the need for the gathering of further available evidence and history.

Debbie has developed an outstanding evolving working relationship with law enforcement.  This dialog has opened the door for significant changes in the way law enforcement engages with these victims.  Debbie routinely has collaborated in the training of EVERY shift at Stillwater Police Department.  That means she is teaching at midnight and developing rapport with first responder law enforcement officers who encounter these victims. Stillwater Police Department recently developed new protocols and tools to go with their lethality assessment in order to develop more evidence and corroboration for prosecution based upon Debbie’s input and her willingness to work with them so closely and respectfully. These new protocols are now being shared with

other surrounding law enforcement agencies, and Debbie is also participating in the training of their officers.  Debbie has also emphasized the importance of having strangulation victims be seen immediately at the hospital and the recognition of the signs and potential evidence that can be found from such examinations. Austin Thomas further said responding police officers are doing a phenomenal job in highly tense and stressful encounters.  It is these types of calls that many times put the officers and the victims at the greatest risk of harm.  We are grateful for the job they are doing.

The relationship between Debbie and first responding officers has led to them being open to follow-up, and to their understanding that they are an integral part of the prosecution team and not simply a witness.  They have become aware of their importance and essential place in the prosecution process and have responded in a tremendous and positive way.

Besides being available to every officer in Payne County at any time day or night, Debbie also serves as the facilitator for the Payne County CCRT and SART (Coordinated Community Response Team/Sexual Assault Response Team).  These essential teams meet monthly and consist of law enforcement, victim advocates, EMTs, medical professionals, and educators.  These meetings provide a great opportunity for the sharing of information and ideas between all the individuals involved which results in better service to crime victims and their families.

Austin Thomas further stated, “This summer we have experienced horrific domestic abuse crimes nearly every week.  The injuries to the victims included strangulation to unconsciousness, stabbing, head trauma, and severe beatings that left victims hospitalized and on ventilators.   The majority of the time the perpetrator has isolated the victim from the ability to get help and controlled their access to others.