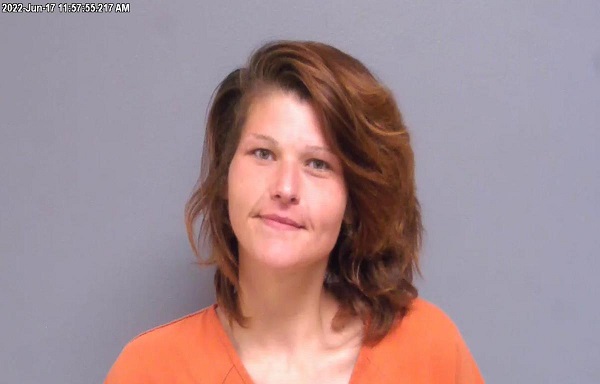 (Stillwater, Okla.) — A Cushing woman, who got out of prison two years ago, has been jailed on $7,500 bail pending her arraignment Tuesday on a charge of breaking into an unoccupied rent house across the street from where she was staying.
Due to her criminal record, Bryttney Nycole Alexander, 32, could be imprisoned for three years to life if convicted of second-degree burglary after two or more former felony convictions. She could also be given a one-year jail term if convicted of possessing methamphetamine.
Alexander was arrested at 11:28 pm on June 16 at the rent house in the 400 block of E. Pecan, Cushing Police Officer Garvis Thomas wrote in an affidavit filed last week.
Shortly before 11 pm, officers had been dispatched to the house regarding a burglary in process, the affidavit alleged.
“Upon arrival, I was able to hear somebody inside the residence moving multiple items around and using a flashlight,” the officer alleged in his affidavit.
At 11:04 pm, “I observed a white female I identified as Bryttney Alexander inside the residence,” who claimed she had been given permission by the son of the resident to go in and take a shower, the officer alleged in his affidavit.
“While walking Alexander to my patrol car, she kept dropping multiple small items from inside her clothing,”
including a bag containing white residue that later tested as methamphetamine, the officer alleged in his affidavit.
The property owner said that the previous renter had moved out two weeks earlier, and nobody else had permission to be there, the affidavit alleged.
Alexander admitted that she knew the renter had moved out, the affidavit alleged.
“During booking, I asked Alexander what she was doing at the residence. Alexander advised she went there to take a shower, but the water was off. I informed Alexander that I listened to her move multiple things around the residence, and it sounded like she was looking for something.
“Alexander advised she was looking around but did not take anything. It should also be noted that Alexander has been staying across the street with a friend that has active utilities and could have taken a shower there,” the officer alleged in his affidavit.
According to court records and the state Department of Corrections, Alexander had previously been placed on probation for drunk driving and child endangerment in Yale in 2015 and methamphetamine possession in Cushing in 2016, but her probation was revoked to four years and 10 months in prison in February of 2019.
Also, in February of 2019, Alexander was given a concurrent five-year prison term for unauthorized use of a vehicle in Stillwater in 2018 after she failed to appear for appointments in the Payne County Drug Court program. She was incarcerated for a year and a half before she was released in August of 2020, DOC records show.