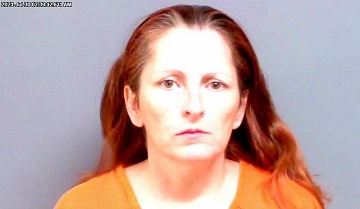 Posted on September 7, 2021
By: Patti Weaver
(Cushing, Okla.) — A 43-year-old Cushing woman accused of punching a restaurant owner on the head, driving her car at the restaurant owner, and hitting the back of the restaurant has been jailed on $5,000 bail pending a Sept. 13 court appearance at which she can seek a preliminary hearing on her felony count.
If convicted of the felony of assault and battery with her car as a dangerous weapon, Katie Toy could be sentenced up to life in prison and fined $10,000. If convicted of misdemeanor counts of punching the restaurant owner on the head and hitting the restaurant building with her car, Toy could be given up to one year and 90 days in jail plus a $1,000 fine.
Toy was arrested at 10:43 pm on July 29 at a restaurant on Main Street, about 25 minutes after Cushing Police Officer Cody Carpenter was sent there on a report of an assault in progress, an affidavit said.
While Carpenter was on the way, he heard Cushing Officer David Smith say over the radio “one at gunpoint,” according to his affidavit.
“When I arrived, I observed a female in a pink shirt and shorts in handcuffs,” standing next to Cushing Police Sgt. Carson Watts, Carpenter wrote in his affidavit.
“I observed two vehicles with significant damage to both vehicles in the parking lot,” Carpenter wrote in his affidavit.
Cushing firefighters and emergency medical technicians arrived shortly, the affidavit said.
While another officer tended to the victim, Carpenter checked on the welfare of two people in the restaurant, “as there was significant structural damage to the outside and inside of the business, as well as a gas line that was damaged. I had the two employees exit the building for their safety until the Cushing Fire Department could come shut off the gas line,” Carpenter wrote in his affidavit.
After the victim was checked out by Cushing EMTs, she told Carpenter that she and Toy’s estranged husband were kissing outside the back door when “Katie came out of the bushes yelling at them,” the affidavit alleged.
The victim said “she went to go get inside of her vehicle and Katie stopped the door from shutting. (She) advised Katie started to hit her while she was seated in the driver’s seat of her vehicle. (She) said Katie ripped a necklace from her neck area and scratched her…(She) advised after Katie was pulled away by the manager, she (Katie Toy) got into her vehicle and attempted to hit her with her car.
“She advised Katie missed the first time and hit the backside of (the restaurant.) She advised Katie then reversed from the building and went to hit her on the driver’s side of her vehicle,” the affidavit alleged.
“Katie advised she caught her husband…with (the victim) behind the building (at the restaurant). Katie advised she hit (the victim) and then tried to hit her with the car. Katie stated she went to hit her the first time and missed because the vehicle she was driving did not turn very well. Katie stated she came back around and intentionally hit,” the victim with her vehicle, the affidavit alleged.
The restaurant manager said that Toy’s estranged husband “came inside after taking out the trash and asked for his help. (The restaurant manager) stated when he went outside, he observed Katie on top of (the victim) hitting her. He stated he pulled Katie off of (the victim) and told her she needed to leave. He stated he observed Katie get into the Ford Focus and run into the back,” of the restaurant, the affidavit alleged.
Toy’s estranged husband said that he went to take the trash out, gave (the victim) a hug “and Katie came out of the bushes accusing him of cheating on her. He stated he and his wife, Katie, were in the midst of getting a divorce. He stated Katie started to hit (the victim) inside of her car and he ran inside to ask,” the restaurant manager for help. He stated once Katie was off of (the victim), she got into her car and ran it into the back,” of the restaurant, the affidavit alleged.
***