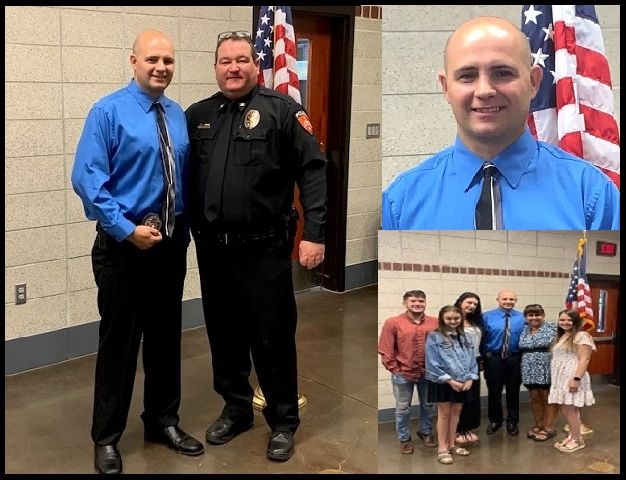 Detective Livergood will begin this new role at the end of the current shift bid for patrol. Detective Livergood had several family members in attendance including mother, Linda, his wife Leslie and his three children. The City Manager and the Deputy Fire Chief were also in attendance. Several CPD staff members attended the meeting virtually along with former Cushing Detective Rachel Bruce. Bruce was last to serve the Cushing PD Detective and she is currently working with Stillwater Police Department.

In October 2016, CID was shut down due to manpower shortage on patrol. At that time the Detective was Rachel Hentges, now Rachel Bruce.

Rachel did an exceptional job the two years she was the detective and Cushing Police Department has a long tradition of good detectives and have no doubt that Detective Livergood will continue that tradition.

Some of the outstanding detectives that have served CPD in the past 20 years:

in 2019 Cushing Police Department again was faced with a manpower shortage on patrol (Investigations was still closed). As an administrator, I wanted to move in the direction to open the Investigation Division back up. Staff has worked diligently for the past year on hiring and we have hired 4 officers to fill vacant positions. Last year, the commission and City Manager agreed to add two additional officers to our staff. Staff has hired a 5th officer to fill one of the additional positions with one position still vacant. Staff is currently conducting testing and interviews for the vacant position.

We are now in a good position moving forward and we have been looking forward to reopening the Investigation Division with Detective Livergood.

In April we posted the open position for Detective and Officer Livergood was interested in the position. This position comes with a lot of responsibility.

Detective Livergood understands the responsibility and demands that come with this new position.

Jerrod Livergood is a Peace Officer with the Cushing Police Department. He has been employed by the Cushing Police Department since February of 2009. He recently completed his 11th year serving for the City of Cushing. As a Patrolman, he patrolled the City of Cushing while conducting traffic stops and responding to calls for service that include emergency and non-emergency calls. Prior to being hired by the Cushing Police Department, Jerrod received his Associates of Science and a second Associates of Applied Science from Oklahoma State University-Oklahoma City. Since being employed by the Cushing Police Department, Jerrod has earned the Advanced Peace Officer certification from the Council on Law Enforcement Education and Training (CLEET). Jerrod became a Field Training Officer in 2015 and has since trained multiple officers giving them a solid foundation to begin their career in law enforcement.
Jerrod Livergood has been happily married to Leslie Livergood for five years. He has three children Jaide, Jacob, and Joselyn. He grew up in Ripley where he received his high school diploma along with the Valedictorian honors. Jerrod is an avid outdoorsman who enjoys playing disc golf and spending time camping with family during his free time.