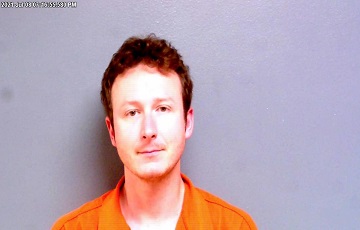 (Stillwater, Okla.) — A 31-year-old Cushing man, who pleaded no contest to a three-count domestic violence charge without an agreement with the prosecution regarding his sentence, has been ordered to register as a violent offender for 10 years when he is released from the Payne County Jail.

Following a hearing last week before Payne County Associate District Judge Stephen Kistler, the defendant, Dilan Scott Newberry was given a one-year jail term for misdemeanor domestic assault and battery for allegedly pressing an orange into his then-girlfriend’s face, pulling her by the hair, and ripping her clothes off.

In a pre-sentencing report, Newberry denied he was guilty of any domestic violence although he had pleaded no contest to threatening his girlfriend with a handgun and hitting her over the head with the weapon, felony counts for which the judge ordered him to register under the Mary Rippy Violent Offender Act for 10 years.

As conditions of a seven-year deferred sentence on both felony counts, Newberry was ordered to take a 52-week batterers’ treatment program, have a substance abuse evaluation, undergo random drug tests, provide a DNA sample and pay $665 restitution, court records show.

Newberry, who had been free on $10,000 bond, was ordered jailed at the close of his July 6 sentencing hearing, court records show.

Newberry had been arrested at his then-residence in Stillwater at 12:25 am on April 27, 2019, about 45 minutes after Payne County Sheriff’s Deputy Dalton Ross was dispatched regarding a domestic violence incident that was no longer in progress, an affidavit alleged.

The deputy was advised that the reporting party had left the residence and gone to Boomer Lake in a black Chevrolet, the affidavit alleged.

“I contacted her and observed her to be very distressed and emotional,” the deputy wrote in his affidavit.

When the deputy saw that the woman’s clothing was minimal, he retrieved a blanket from his patrol car so she could cover herself, the affidavit said.

The woman said her boyfriend, identified as Dilan Newberry, had attacked her, the affidavit alleged.

“She told me he had bit her toes, hit her in the face, then struck her on top of the head with a gun,” the deputy alleged in his affidavit.

“I noticed the left side of her face above her eye was red. She had a mark on the top of her head that was superficial. It appeared to be an outline of something she was struck with. On her left foot, she had fresh blood on her toes,” the deputy wrote in his affidavit.

The woman said that for a couple of years she has been in a dating relationship with Newberry and stays with him in Stillwater, the affidavit alleged. “She said both of their names were on the property lease agreement,” the affidavit said.

In a petition for an emergency protective order that was issued on May 1, 2019, the woman alleged that on April 26, 2019, after Newberry said and sang degrading things to her, “I threw my Styrofoam cup of Pepsi at him. That is when he jumped off the couch and picked up the electric fan to hit me with. After he puts the fan down, he picked up an orange from the coffee table and tried to force it into my mouth, but ended up smashing it on my face.

“After screaming at him, the ‘fight’ transitioned to the couch where he told me he was going to bite off my toes and when he went to bite my toe, I pulled it out of his mouth, but I now have deep puncture wounds on both sides of my toe.

“I was able to get him loose by hitting him with my fist on the left side of his head, but that only encouraged him to bite the top of my scalp and rip out a chunk of my hair and punch me three times in my face.

“Although I had my arms up blocking the blows, some still got through. That is when I started repeatedly screaming/crying at him ‘Why are you doing this. Why do you always want to hurt me’ which he replied with ‘Shut the f… up or leave.’ But I was too hysterical to move.

“That is when he went to his desk and pulled his handgun out from the bottom drawer, pointed it at me and threatened to kill me.

“That’s when I got up to leave, but realized my phone was still in the couch and when I reached down to grab it, he hit me on the top of my head with his gun. I grabbed my dog and purse, then left. After I pulled my car out of the lot, I called 911 and two officers met me at Boomer Lake.”

Her protective order against Newberry was dismissed on Nov. 21, 2019, for lack of prosecution when his ex-girlfriend failed to appear in court.

In a pre-sentencing report, Newberry claimed he was innocent: “There is no way to prove anything, just she and I were there…She pointed the gun at me, there was not a clip or any ammo with the gun. She hit me in the back of the head with something. I didn’t hit her with the gun. She made it look like she frantically left, but I just wanted her gone.”

“Mr. Newberry stated he attended school in Cushing, Oklahoma, until the eighth grade. He stated he left school to be home-schooled, but never went much further. He stated his grandfather had lots of money, so he never saw the value in school. Mr. Newberry reported he had been suspended during his school years,” the report said.

According to court records, two months before the alleged domestic violence incident, Dilan Newberry had been accused of shoplifting art supplies from Hobby Lobby in Stillwater on Feb. 19, 2019, a misdemeanor on which he has been ordered to appear in court on July 20.