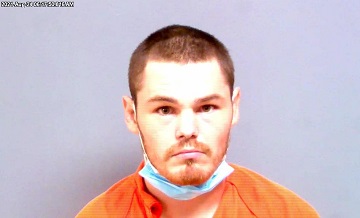 (Stillwater, Okla.) — A Cushing man, who remains jailed on $50,000 bail pending his arraignment with an attorney on Aug. 31, told police that he started receiving child pornography after his phone was hacked about five years ago, court records show.

If convicted of possessing photos on Aug. 24 of nude young children performing sexual acts, Matthew James Albright, 25, could be given as much as a 20-year prison term and a $25,000 fine, according to the felony charge filed by prosecutor Debra Vincent this week.

Albright had gone to the Cushing police station at 12:06 am on Aug. 24 to talk to police about his phone being hacked about five years ago, Cushing Police Officer Garvis Scott Thomas wrote in an affidavit.

“Albright further advised his (female) roommate had his phone and was refusing to give it back to him. Albright eventually informed me that when his email was hacked approximately five years ago, he started receiving pictures from different people. Albright then advised the pictures were of child pornography.

“Albright explained he was saving the photos because he was eventually going to come and report it to the police. When asked why he waited so long, Albright advised he was scared.

After Albright signed a consent to search his phone, “Sgt. Carson Watts read the form aloud to Albright making sure he understood the form’s meaning. Albright was also informed officers would be seizing the phone if pictures were located on it because of what Albright admitted to having on his phone.

“Albright then stated, ‘I guarantee you, you will find them on the phone.’ Albright was informed he could deny officers to look at the phone, but we would still be seizing the phone and requesting a search warrant.

“Albright then informed us he would still allow officers to look through the phone. When asked if he took screenshots of the photos or downloaded them, Albright advised he downloads them,” the officer alleged in his affidavit.

At about 1:27 am on Aug. 24, Albright escorted Sgt. Watts and Officer Thomas to his apartment at Crossroad Villa on S. Little Ave. in Cushing, the affidavit alleged.

After Albright’s roommate answered the door and handed Albright’s phone to police, “I observed multiple nude pictures of prepubescent children,” performing sexual acts and posing in attempted seductive manners, the officer alleged in his affidavit. “Some of the pictures had multiple children in them,” the affidavit alleged.